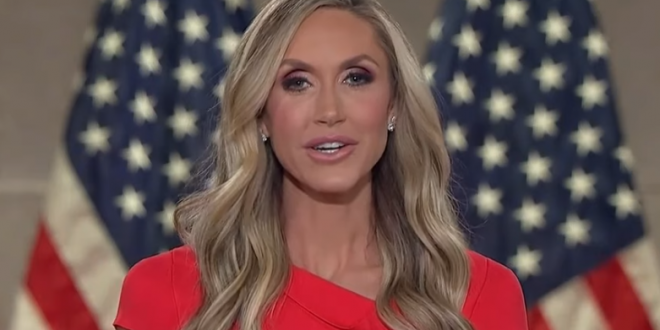 As Albert Einstein once notably stated, “The problem with quotes you find on the internet is they are often untrue.” Lara Trump, President Trump’s daughter-in-law, learned that the hard way on Wednesday night.

During her speech at the Republican National Convention, Trump declared that Abraham Lincoln “once famously said, ‘America will never be destroyed from the outside. If we falter and lose our freedoms, it will be because we destroyed ourselves.'”

Last year, a Facebook meme crediting Lincoln with that statement went viral in right-wing circles, but both PolitiFact and Snopes have debunked it.

The speech by Trump – the wife of President Trump’s son Eric – continued a theme that has been present throughout this year’s RNC: that electing Democratic presidential nominee Joe Biden will lead the country down a path favored by the more progressive members of the Democratic Party.

“This is not just a choice between Republican and Democrat or left and right — this is an election that will decide if we keep America America, or if we head down an uncharted, frightening path towards socialism,” she said.

Trump continued: “Will we choose the right path and maintain the unique freedoms and boundless opportunities that make this country the greatest in the history of the world? The choice is ours.”

Lara Trump on meeting the Trump family: “They were down to earth.”#RepublicanConvention pic.twitter.com/gxKfzDPg1i

This used to be true. Isn’t anymore. They’re just pretending that the pandemic never happened.

As of July 2020, women had lost more than 3 million jobs under Trump.

Lara Trump just bragged about the women’s unemployment rate. Someone should tell her that that nearly 4 million fewer women have jobs now than when Trump took office. #TrumpChaos pic.twitter.com/7gObXZk6d6

Lara Trump just admitted she was a server who worked for tips, but AOC was just mocked for being a bartender.

Per Mary Trump, at a family dinner at the White House in 2017, Trump said of Lara, in her presence, who had been with his son for 8 years that until she campaigned for him the previous year: “Lara, there, I barely even knew who the fuck she was, honestly.”

Lara Trump says the thing that so impressed her upon meeting the Trump family was that “they were down to earth.” pic.twitter.com/lgsWpeLmzw