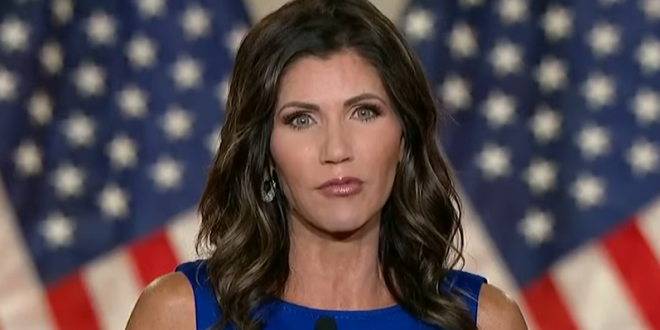 Gov. Kristi Noem told the nation Wednesday night that President Donald Trump is fighting for the United States’ liberty, security and Constitution against “Democrats and their radical supporters” in cities “overrun by violent mobs.” In a defining moment of her political career, Noem capped off months of rising national interest when she addressed the virtual Republican National Convention from Washington, D.C.

She has been hailed by Republicans as the governor who stood for freedom and personal responsibility rather than stay-at-home orders and mask mandates during the COVID-19 pandemic, but her speech Wednesday came after days of record-setting high numbers of COVID-19 cases were reported in South Dakota. The speech, which ran just over five minutes, gave no mention of the coronavirus pandemic. Instead, Noem turned her focus to the founding fathers.

Noem, 48, invoked an 1838 speech by Abraham Lincoln, saying Trump faces similar challenges during national unrest following the Minnesota police killing in May of George Floyd. “At times, our country has struggled to live up to our founding principles. Another great American, Abraham Lincoln, knew that struggle better than anybody,” Noem said.

Noem said that Lincoln, witnessing the struggle over slavery, was concerned about people who had “their property destroyed, their families attacked, and their lives threatened or even taken away. These good people were becoming tired of, and disgusted with, a government that offered them no protection. Sound familiar?”

Kristi Noem compares Trump to Abraham Lincoln and America today to the period before the Civil War https://t.co/kZiZfWsVya

The sycophancy is revolting: South Dakota Gov. Kristi Noem compared Trump to President Lincoln. “History chooses its heroes for the time in which they live.” #RNCConvention #RepublicanConvention #RNCConvention2020 https://t.co/dqYt1K55h7

Kristi Noem compared Trump to Lincoln: “He was alarmed by the increasing disregard for the rule of law throughout the country. He was concerned for the people that had seen their property destroyed, their families attacked & their lives threatened … Sound familiar?”

Science says we can’t stop the virus from spreading. That’s why we do what we can to care for our vulnerable population.

“Shutting the country down” would only stop our economy and harm a LOT more people than #COVID19. Lockdowns DON’T work.https://t.co/ZG9thaMduE

Previous RNC Guest Speaker: Biden Is A Catholic In Name Only
Next Marsha Blackburn At RNC: Communist Dems Want To Cancel The Police/Military And Lock You In Your Home