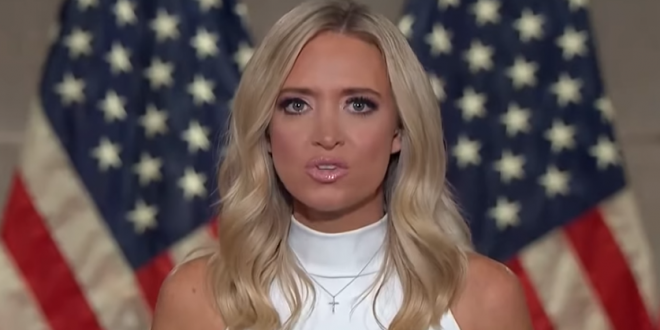 Wednesday night, White House press secretary Kayleigh McEnany went on prime time TV during the third night of the Republican National Convention and told what might be one of the biggest lies of the evening. President Trump, she said, “stands by Americans with preexisting conditions.” To prove it, McEnany told a personal story. “Tonight, I’m here to share with you how he supported me—both as a new mom and as an American with a preexisting condition,” she said.

What McEnany didn’t tell the national audience was that the Trump administration is at this very moment fighting in court to end protections for people with preexisting conditions like hers. It has supported a lawsuit, brought by Republican state attorneys general, that would overturn the Affordable Care Act, better known as Obamacare. Despite many promises to do so, the Trump administration has not proposed any new health plan to replace it.

She said she had tested positive for the BRCA2 gene mutation when she was 21, which is “associated with an increased risk of breast cancer in both men and women,” according to the National Institutes of Health. McEnany said she then decided to get the breast surgery to limit her chances at getting breast cancer.

“I was scared,” she remembered. “The night before I fought back tears as I prepared to lose a piece of myself forever.”

She added: “But the next day with my mom, dad, husband, and Jesus Christ by my side, I underwent a mastectomy, almost eliminating my chance of breast cancer — a decision I now celebrate.” McEnany said Trump, 74, supported her by calling to check up on her after she came out of the May 2018 surgery.

He’s suing to overturn the ACA, preexisting condition provisions and all, with no plan.

But his administration is asking the Supreme Court to strike down the entire Affordable Care Act — which protects patients with pre-existing conditions. https://t.co/L3ZgLH4GZW

Kayleigh McEnany is a preexisting condition

His administration is in court RIGHT NOW to eliminate those protections and the entire ACA. #TrumpChaos pic.twitter.com/qSD2HBiKVX

If successful, @realDonaldTrump’s lawsuit would end protections for more than 135 MILLION people with pre-existing conditions and throw the entire American health care system into chaos — in the midst of a pandemic.

Previous Conway At RNC: Trump Provides America With Dignity
Next RNC Guest Speaker: Biden Is A Catholic In Name Only