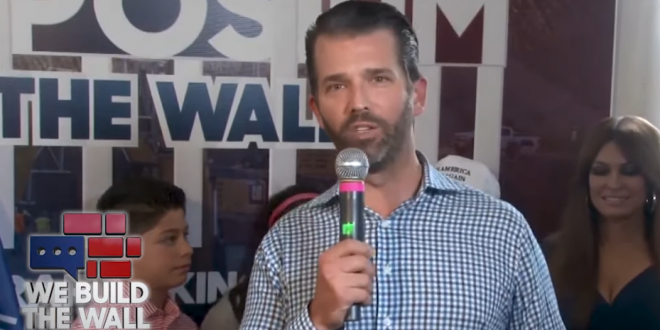 President Trump’s son, Donald Trump Jr., is seeking to distance himself from the “We Build the Wall” crowdfunding campaign after former White House chief strategist Stephen Bannon and three others were arrested and charged with defrauding donors. A spokesperson for Trump Jr., whose name is listed on the organization’s website as having endorsed it, said he had minimal involvement with the We Build the Wall group.

“Don gave one speech at a single We Build the Wall event over a year ago with a group of angel moms and besides that, has no involvement with their organization,” spokesperson Amanda Miller said. A website for the campaign still included endorsements from Trump Jr., as well as former Trump campaign manager Corey Lewandowski and Kimberly Guilfoyle, a top fundraising official for the 2020 campaign, as of Thursday morning.

Donald Trump Jr. praised We Build The Wall and Brian Kolfage at a 2018 event: “This is private enterprise at its finest. Doing it better, faster, cheaper than anything else. What you guys are doing is amazing.” pic.twitter.com/hOL25JoZPI