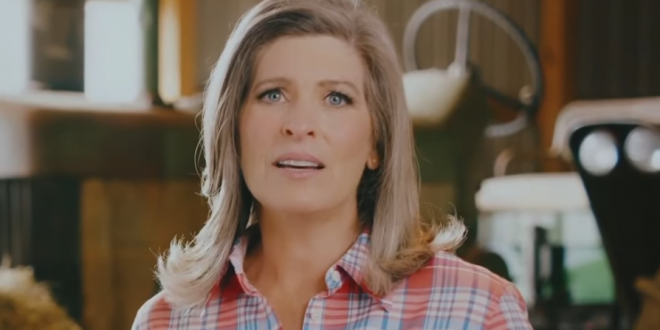 Sen. Joni Ernst spoke of her military experience and praised President Donald Trump’s response to the windstorm that struck Iowa two weeks ago during her Wednesday night Republican National Convention speech. Ernst said she worked with Trump to scrap President Barack Obama’s Waters of the United States rule, which she said “would have regulated about 97% of land in Iowa — in some cases, even puddles.” PolitiFact has previously found that claim to be “mostly false.”

Joni Ernst: “The Democratic Party of Joe Biden is pushing this so-called Green New Deal. If given power, they would essentially ban animal agriculture and eliminate gas-powered cars.” 🧐

🤦‍♀️ Once again in a response to Republicans starting with “can’t believe I have to say this” but no, Biden/Harris will not ban farm animals. #GOPConvention https://t.co/yGHsg5SoXM

Iowa @senjoniernst just told the #GOPConvention that @JoeBiden would “ban animal agriculture and eliminate gas-powered cars.” If you believe this garbage, vote GOP. If not, help send Theresa @GreenfieldIowa to the US Senate. #IASen https://t.co/Bx7q42qM4w

My opponent @joniernst just wrapped up her speech at the RNC and one thing is clear: Iowans deserve better than Joni Ernst.

Together, we can flip this #IASen seat and the Senate. But I can’t win this thing alone. Can you step up right now? https://t.co/3XsCCtRbvU

Previous Marsha Blackburn At RNC: Communist Dems Want To Cancel The Police/Military And Lock You In Your Home
Next RNC Spotlights Alleged White Nationalist Candidate