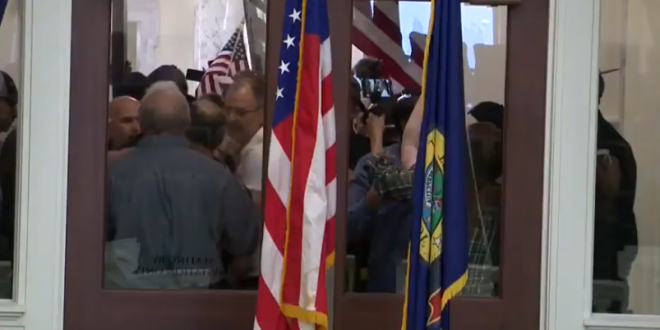 Angry, maskless spectators forced themselves into the Idaho House special session on the coronavirus pandemic Monday, shattering a glass door, rushing into the gallery that had limited seating because of the virus and forcing lawmakers to ask for calm in a crowd that included a man carrying an assault-style weapon.

“This is our house,” said Allen Clark of Meridian, who was among those who got in. “We own this house. We pay taxes. We’re citizens of Idaho. Why can’t we be allowed in a public meeting?”

Clark also carried across his chest what he said was a Yugoslavian M70B1 with a loaded 30-round magazine. Idaho permits the open carry of firearms, including in the Statehouse.

Unfortunately, I had to excuse myself from Committee due to lack of social Distancing and the large crowd that filled the Lincoln auditorium. The crowd was hostile to me but I tried to remind them of the need for civility. Didn’t matter. This is what we have come to.

Just for context..in 2014 and 2015 nearly 150 #AddTheWords protestors were arrested at Idaho’s statehouse..for blocking a doorway and holding up cardboard signs.. https://t.co/OWxEP0AgaK

Idaho House Minority Leader Ilana Rubel says members of her Democratic caucus are so uncomfortable about the health situation at the Statehouse they may leave the session entirely. Rubel calls it a “super spreader event.” https://t.co/wz5Ll4sF1A pic.twitter.com/VRdbvRUtOm