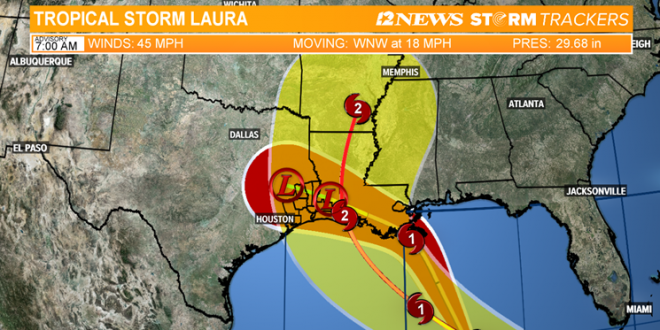 The northern Gulf Coast is bracing for a rare one-two hurricane punch as two tropical storms — Laura and Marco — both set their sites between Louisiana and east Texas. Marco, predicted to make landfall in southeast Louisiana on Monday, is the most immediate threat. Hurricane warnings are posted from Morgan City in south central Louisiana to the mouth of the Pearl River between New Orleans and Gulfport.

A storm surge warning has been hoisted from Morgan City east to near Biloxi, Miss. where the ocean water could rise several feet above normally dry land. Grand Isle, in extreme southeast Louisiana, is under a mandatory evacuation order. Downtown New Orleans is under a hurricane watch and a tropical storm warning due to Marco and is likely to contend with tropical-storm-force winds and heavy rain, which could cause flash flooding.

Portions of the U.S. Gulf coast are likely to experience a prolonged period of hazardous weather this week due to #Marco and #Laura. Follow @NWSKeyWest, @NWSMobile, @NWSNewOrleans, @NWSLakeCharles, and @NWSHouston for the latest local forecast information in the affected areas. pic.twitter.com/glWZvxhTPU

Previous GOP Senate Nominee Explains Her Devotion To QAnon Batshittery: I Don’t Need To Be A Scientist, I Can Read
Next Acting DHS Sec. Chad Wolf Bucks Trump: We Have No Authority To Send Federal Agents To Polling Stations