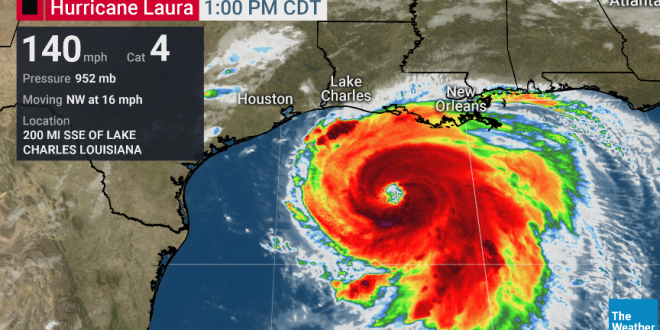 Hurricane Laura Upgraded To Category 4, Expected Landfall Overnight With Storm Surge Of Up To 20 Feet

Hurricane Laura has strengthened into a Category 4 as it heads for a destructive landfall near the Texas and Louisiana border Wednesday night into early Thursday morning. A catastrophic storm surge and damaging winds will batter the region and a threat of flooding rain and strong winds will extend well inland.

Residents along the upper Texas and southwest Louisiana coasts should finish preparations now for a major hurricane strike. Follow any evacuation orders issued by local or state officials.

Laura is centered about 200 miles south-southeast of Lake Charles, Louisiana. It’s tracking to the northwest at 16 mph. The hurricane is now a Category 4 with 140 mph winds. Some slight additional strengthening is possible through this afternoon.

The storm, which has leaped from a Category 1 to a Category 4 since Tuesday, is forecast to make landfall at this “catastrophic” intensity between Houston and Lake Charles, La., on Wednesday night or early Thursday morning. Hurricane and storm surge warnings cover much of this zone.

Beaumont and Port Arthur, Tex., which were severely damaged during Hurricane Harvey in 2017, may be near the point of landfall, where officials have ordered evacuations.

Depending on the timing of the storm, Laura may strike near high tide, inundating coastal areas of western Louisiana to the Texas border under between 15 to 20 feet of water. The Hurricane Center warned of an “unsurvivable” surge with “large and destructive waves” and that areas up to 30 miles inland could be inundated.