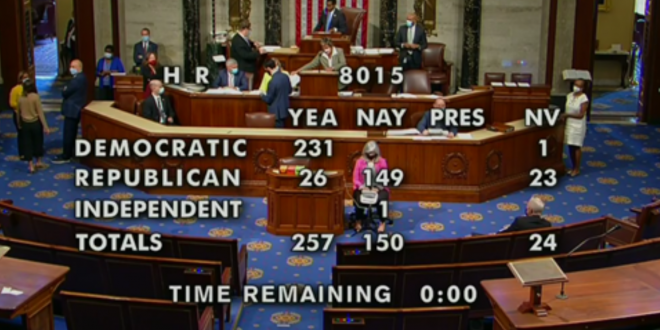 The House voted Saturday on legislation to provide $25 billion to the U.S. Postal Service and explicitly prohibit any operational changes amid widespread Democratic fears that the Trump administration is trying to disenfranchise millions of Americans casting mail ballots this November.

The 257-to-150 vote was largely along party lines as Republicans accused Democrats of manufacturing “baseless conspiracy theories” about delays in postal deliveries to undermine President Trump’s reelection bid. The Republican-led Senate is unlikely to act on the legislation, which the White House has threatened to veto.

Shortly before the vote, Trump tweeted: “Vote NO to the Pelosi/Schumer money wasting HOAX which is taking place now.” Twenty-six Republicans broke ranks with Trump and the GOP leadership and joined Democrats in backing the bill.

Representatives of the Post Office have repeatedly stated that they DO NOT NEED MONEY, and will not make changes. This is all another HOAX by the Democrats to give 25 Billion unneeded dollars for political purposes, without talking about the Universal Mail-In Ballot Scam….

….that they are trying to pull off in violation of everything that our Country stands for. Vote NO to the Pelosi/ Schumer money wasting HOAX which is taking place now. Then fight the $51 million unasked for Ballots. Only ABSENTEE BALLOTS are acceptable!