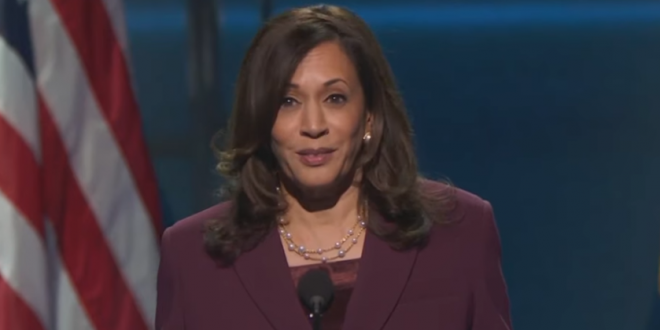 Harris On Trump: I Know A Predator When I See One

Harris, a former San Francisco district attorney and California attorney general, spoke about her time as a prosecutor and about growing up in the Bay Area as the daughter of immigrants. She also zeroed in on Trump’s character, implying that he is a “predator” in a line she has used on the campaign trail before.

“I’ve fought for children and survivors of sexual assault. I’ve fought against transnational gangs. I took on the biggest banks and helped take down one of the biggest for-profit colleges. I know a predator when I see one,” she said.

As she accepted the Democratic nomination for vice president on Wednesday night, California Sen. Kamala D. Harris recounted how she had been taught to “put family first.” That covers both “the family you’re born into and the family you choose,” she said. Family is her husband, she said, and her two step-kids. Her sister, her sorority, her best friend, her godchildren. And then, she added, “Family is my uncles, my aunts and my chittis.”

That last word, a Tamil term of endearment for the younger sisters of one’s mother, was met with a fierce outpouring of pride across social media on Wednesday night. For many Tamil Americans, Harris’s use of சித்தி — which can also be spelled out phonetically in English as “citti,” “chitthi” or “chitthi” — was more than just another word for “auntie.” It was a small but significant way for the vice-presidential candidate to say, before an audience of millions, that she is one of them, too.