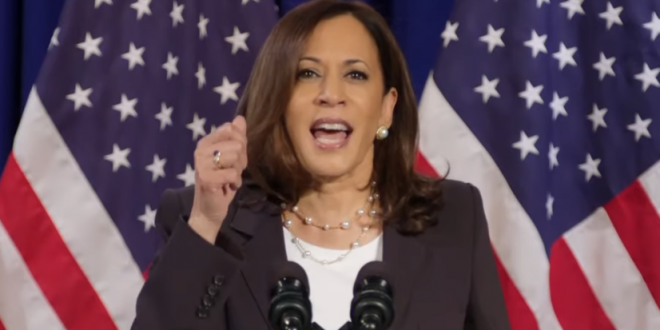 Harris Eviscerates Trump Over COVID Failures: He Was Scared, He Was Petty, And He Was Vindictive [VIDEO]

Democratic vice presidential nominee Sen. Kamala Harris (D-Calif.) on Thursday launched a blistering attack at President Trump ahead of his speech at the Republican National Convention, saying the president has failed to protect the U.S. in a time of multiple crises.

“Unlike the Democratic convention, which was very clear-eyed about the challenges we face and how we will tackle them, the Republican convention is designed for one purpose, to soothe Donald Trump’s ego, to make him feel good,” Harris said speaking from the George Washington University in Washington, D.C.

I worked on campaigns for a long time and my semi informed guess is that there’s at least one non delusional person on the Trump side at this moment who sees Kamala Harris as the incredibly skilled and highly credible messenger she is. No one on Trump side speaks like this.

Today, Sen. Kamala Harris issued a forceful rebuke of President Trump, hammering the president for his response to the coronavirus pandemic in a speech designed to preemptively rebut Trump’s nomination speech later this eveninghttps://t.co/A1gVcw761k

Kamala Harris: “Instead of rising to meet the most difficult moment of his presidency, Donald Trump froze. He was scared. And he was petty and vindictive.”

Harris: “Here’s what you have to understand about the nature of a pandemic. It’s relentless. You can’t stop it with a tweet. You can’t create a distraction and hope it will go away.” pic.twitter.com/eIBtMFVqeH

Harris: “Instead of rising to meet the most difficult moment of his presidency, Donald Trump froze… the tragedy in all of this is it didn’t have to be this bad. Look around. It’s not like this and the rest of the world… all we needed was a competent president.” pic.twitter.com/g1xyTSnlVS