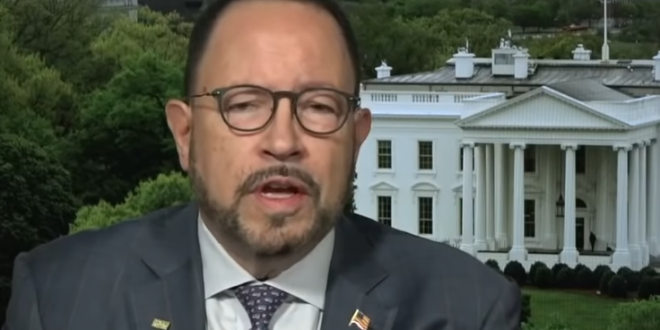 UPDATE: Goya CEO Not Speaking Tonight After All

Michael Estevez of Burson Cohn & Wolfe, a public relations firm representing Goya, subsequently told The Hill that Unanue would not be speaking at the RNC. The campaign did not respond to further questions about Unanue’s potential appearance during the program. Unanue was not named among the group of speakers issued by the campaign earlier Wednesday.

Goya Foods CEO Robert Unanue will deliver remarks during the third evening of the Republican National Convention on Wednesday.

Trump campaign communications director Tim Murtaugh told reporters Wednesday that Unanue would be among those making an appearance during Wednesday’s program, which is themed “Land of Heroes.”

Unanue made headlines in July when complimentary remarks he made about President Trump at the White House prompted a boycott of Goya products.

The remarks inspired criticism from Hispanic leaders and calls for a boycott of Goya Foods on social media. Goya brands itself as the largest Hispanic-owned food company in the United States.

If it’s Goya, it has to be good.
Si es Goya, tiene que ser bueno. pic.twitter.com/9tjVrfmo9z

After Ivanka Trump posted a potentially illegal picture of her holding a can of Goya beans, the President shared a photo posing with Goya products at the Resolute Desk. Legal scholars suggest both posts violated the Office of Government Ethics’ guidelines on endorsements. pic.twitter.com/klrpsfhBkG