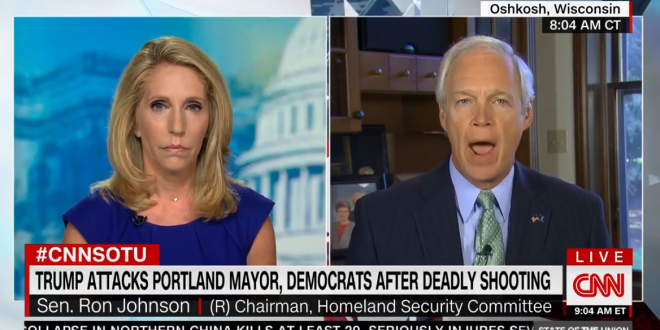 Speaking with “State of the Union” host Dana Bash, Johnson repeatedly spoke over her while manically spouting out prepared comments and ignoring her questions that led the CNN host to finally cut him off.

BASH: “The 17-year-old accused of committing two murders was a Trump supporter. Do you condemn that?”

JOHNSON: “It is a tragedy.”

BASH: “Do you condemn it?

BASH: “It is a tragedy, but do you condemn it?”

JOHNSON: “The entire situation is a tragedy.”

“I’m not for vigilantism. I’m not sure that’s what was happening … people took matters into their own hands” — Ron Johnson won’t condemn Kyle Rittenhouse, a Trump supporter who is charged with first-degree murder for killing two protesters in Kenosha pic.twitter.com/NE0oumPk5X