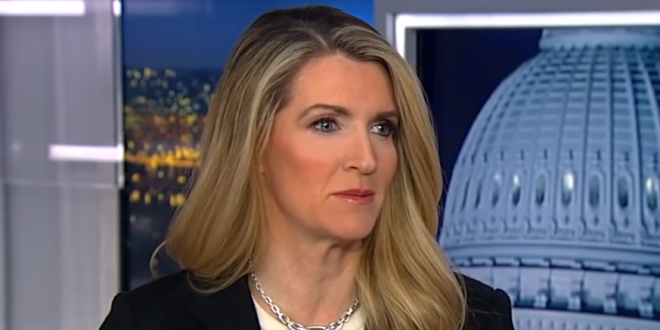 U.S. Sen. Kelly Loeffler granted an interview to a TV pundit associated with white supremacy and Nazism. The interview aired on One America News Network on Thursday and Loeffler promoted it heavily on her Facebook and Twitter accounts Friday, tagging the controversial host.

Jewish groups and media observers pointed out that Posobiec promotes conspiracy theories and once associated with white supremacists including Richard Spencer, who organized the Unite the Right rally in Charlottesville, Va.

Posobiec has been criticized in the past for posting anti-Semitic tweets, including tweets that included the numbers 14 and 88, codes used by neo-Nazis. Loeffler’s team would not say whether she was aware of Posobiec’s ties to Nazism and anti-Semitism, and they condemned the AJC for asking about it.

Last month the SPLC issued a lengthy report on Posobiec’s ties to white supremacist groups. Posobiec first gained national attention for stunts such as holding up a “Rape Melania” sign at an anti-Trump protest. In June he falsely claimed that Black Lives Matter protesters had planted pipe bombs on DC’s National Mall.

The @splcenter may have once done good work. Today, it’s a hypocritical group of left-wing extremists with one objective: Silencing conservatives. It has no credibility & the media should stop repeating their lies.

And when @realDonaldTrump delivered a pro-family, America first message to @FRCdc last year, @splcenter called it a “festival of bigotry and hate.” https://t.co/aKRx4RHOvj

The @ajc would rather peddle talking points from @splcenter — a discredited liberal group that trashes @realDonaldTrump & labels pro-life groups and @RealBenCarson as “extremists” — than condemn the BLM political organization. https://t.co/Z1wxv5mTXH

ICYMI — watch my conversation with @JackPosobiec & @OANN here. I’m continuing to speak out against cancel culture and taking action to restore law and order in our cities. https://t.co/kKrR3JISzC #gapol #gasen

I joined @JackPosobiec on @OANN to discuss why I had to call out the BLM political organization — and why the woke mob is trying to cancel me.