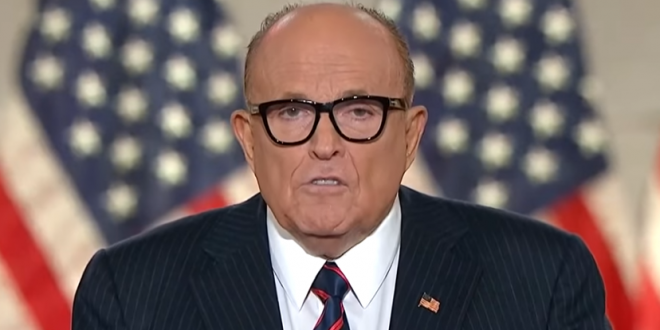 Rudy Giuliani is painting a grim portrait of violence in America as he endorses President Donald Trump’s reelection bid at the Republican convention. He made no mention of the Russia investigation, in which he defended Trump, or his role in trying to dig up dirt on Biden in Ukraine.

The saga ended up with Trump getting impeached by the Democratic-led House, but he was acquitted by the Republican-led Senate.

The former New York mayor said in his speech Thursday that a vote for Democrat Joe Biden is a vote for “soft on crime” policies and risks a continuation of the “wave of lawlessness” that he says is ravaging the country.

Giuliani took on the “unprecedented wave of lawlessness” that has swept across the U.S. at the RNC Thursday night, accusing the Black Lives Matter movement and Antifa of turning peaceful protests into “vicious, brutal riots.”

As mayor of New York City, Giuliani was famous for championing a controversial record of crime-fighting, including policies like stop-and-frisk.

He tore into his successor Bill De Blasio for allowing crime to rise in New York, and accused Joe Biden of being a “Trojan horse” for progressives “waiting to execute their pro-criminal, anti-police, socialist policies.”

“Let’s remember that a lot of what was being called ‘criminal activity’ in New York City that began under Rudy Giuliani was essentially walking while Black, or Latino…It was called stop-and-frisk,” @mayawiley says in response to Rudy Giuliani’s RNC speechhttps://t.co/4HVWQl8dIA

There were 319 murders in New York last year.

Giuliani’s conspiracy theory is truly ridiculous. He’s arguing, explicitly, that violent protests happened because…”the left,” “Black Lives Matter” and “Antifa” were worried that Congress was too unified on police reform and so Trump would look too good if they didn’t act.