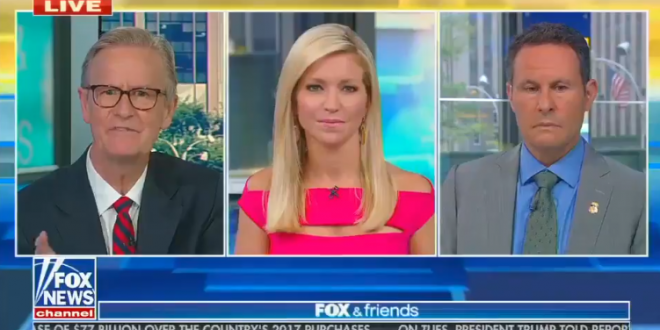 Fox & Friends hosts Ainsley Earhardt and Brian Kilmeade teed up a montage of fawning media praise for former Vice President Joe Biden’s DNC speech, after which Earhardt conceded “It was a good speech” and described the elements she thought were effective.

On Friday morning’s edition of the Fox News morning show, the general tenor was to cast the former VP’s well-received DNC acceptance speech in the context of expectations set by President Donald Trump and his campaign — as much of the media has done.

Co-host Steve Doocy opened the show by discussing those expectations, and admitting that Biden “did okay.”

People on Fox & Friends have said all week that the Democratic convention was too depressing, all doom-and-gloom — but this morning they’re upset that people on TV called Joe Biden’s speech “hopeful,” because the real story is Democrats in Disarray. pic.twitter.com/m3ikvswesI

Fox & Friends suggests the Biden campaign stole its “drive-in” ending to the DNC from a previously-floated Trump idea to do a rally at a drive-in theater — or from news muppet Greg Gutfeld, or from a handful of churches. Almost like ‘event in parking lot’ isn’t anyone’s idea. pic.twitter.com/XLFmX0rj2A