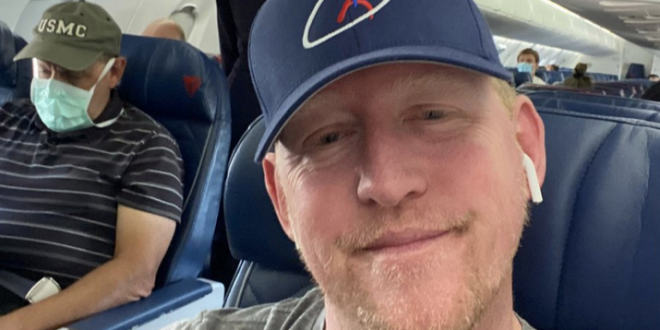 The former Navy SEAL famous for his part in the raid that killed Osama Bin Laden was banned by Delta Air Lines after he refused to wear a mask aboard a flight, and bragged about it on Twitter.

Robert J. O’Neill, a former Navy SEAL who claims to have fired the shot that killed Osama Bin Laden during a 2011 raid, was on board a flight on Wednesday when he tweeted a selfie with the caption “I’m not a pussy.” Unlike a fellow passenger in a US Marine Corps hat and a flight attendant visible in the photo, O’Neill was not wearing a mask.

O’Neill, who left the Navy in 2012 and works as a public speaker and Fox News contributor, deleted the tweet after about five hours. A spokesperson for Delta confirmed that the airline was investigating the incident, but declined to comment on specifics.

I had my mask in my lap. Everyone has gone crazy.. https://t.co/tWyqm59o6j via @washtimes

Former Navy SEAL Robert O’Neill, who claims to have single-handedly killed Osama bin Laden, has been banned from Delta Air Lines after tweeting a maskless selfie aboard a flight, he said.https://t.co/W5PR9h3Pps

This is absolutely unnecessary and a disgrace @Delta We stand with our brother in arms! It is not a good idea to ban veterans! Do you have any idea how many there are of us? We tend to have each other’s backs. If you read through his feed, he has a sense of humor! https://t.co/rB6DVUjnii

My dad is also from Butte, Montana, also a vet. You’re locally known as a complete asshat. You’ve commit an extreme military faux pas by taking credit for killing Osama Bin Laden, the efforts of many people and teams, but still have it in your Twitter bio. Shame on you.

Besides that, he charges exorbitant speaker fees and has made a career out of the fact that “he” killed Bin Laden. Shameless opportunist, he probably expected the backlash from the Delta pic. https://t.co/4B3kLF3ljq

Previous Lou Dobbs: Bannon’s Arrest Is A “Deep State” Plot
Next Trump Claims Joe Biden “Abandoned” Pennsylvania Because Biden’s Family Moved Away When He Was 10