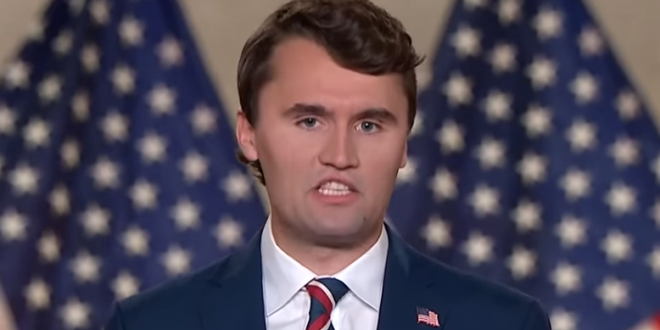 Kirk is a Trump family confidant and the head of Turning Point USA, which is devoted to attracting and energizing young voters. Kirk blamed “bitter, deceitful, vengeful” opponents for the nation’s woes and described Trump as an antidote to that division.

Kirk’s message offered a particularly bleak view of the nation, arguing the country is “locking up pastors” while “releasing violent criminals from prison” and “kicking doctors off of social media” while “promoting Chinese state-funded propaganda” on other tech platforms. “Trump is the bodyguard of western civilization,” he said.

The 26-year-old conservative activist framed November’s election as a battle between “preserving America as we know it and eliminating everything that we love.” He said the nation’s values were under attack from “deceitful, vengeful, arrogant activists.”

However, reelecting Trump, “will ensure that our kids are raised to love America, not taught to hate our beautiful country,” Kirk said.

The youth activist, who founded his nonprofit in 2012, when he was just 18, has been a longtime supporter of Trump. The president has spoken at a number of the organization’s events.

Fox News cut away from the RNC as soon as Charlie Kirk started talking pic.twitter.com/SVgFarOnxL

Just re-upping my early story on Charlie Kirk, whose national Field Director got caught texting, ““i hate black people. Like fuck them all.” https://t.co/sm4xD0BEir via @NewYorker

Charlie Kirk started by saying he’s “speaking to you in my personal capacity tonight as a 26-year-old…” and I missed the rest of his speech because maaaan that’s a rough 26 pic.twitter.com/W5VIGNlVO9

Charlie Kirk, co-founder of Turning Point USA, heralded Donald Trump as the “defender of Western civilization” at the RNC.

The Anti-Defamation League and SPLC note that Turning Point USA members have been linked to extremist and white nationalist groups. https://t.co/nOi32Qd61L

Charlie Kirk just said trump put his “life of luxury” on hold. Tell that to his golf resorts.

Not sure what he was referring to, but some pastors have been arrested this year for violating their areas’ pandemic restrictions by holding services. (Not for generally being Christians.)

Charlie Kirk is not even 30, makes $292,423 a year from Turning Point USA and is opening up the RNC by complaining about poorly qualified elites who run the country. Fox News didn’t even carry the full speech.

Charlie Kirk: Trump “is the bodyguard of Western civilization.”

For all you swing voters out there….i’d recommend going to Charlie Kirk’s twitter feed.

Note that Charlie Kirk, speaking right now, did not introduce himself as the co-founder of the Falkirk Center at Liberty University, which he founded with…Jerry Falwell Jr. (hence it’s name).

Tried to watch Charlie Kirk, a 26 year old conservative Republican speak at the RNC Convention. Scary, I mean truly scary. This was Adolph Hitler talk, American style, us verses them and them (us) are as evil as the Jews who “stabbed Germany in the back.” Incredibly dangerous. pic.twitter.com/zTuBGWDUmP

Kirk looks like a fleshy honeydew with a Howard Cosell toupe.