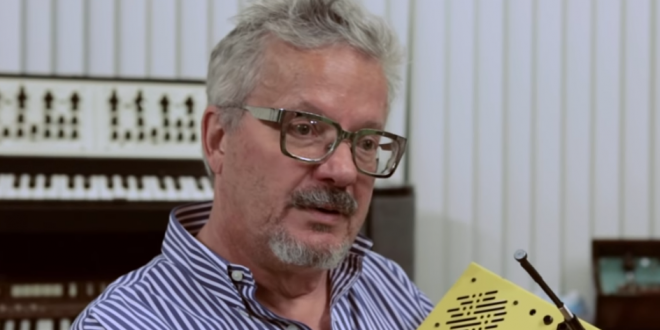 Devo frontman Mark Mothersbaugh spent 18 days at L.A.’s Cedar-Sinai hospital battling Covid-19 in June, he revealed in a harrowing interview with the Los Angeles Times.  Mothersbaugh thinks he may have contracted the virus in late May while working near strangers at Mutato, his music production company. He dismissed early symptoms as mere fatigue, but called in his wife when his fever hit 103.

“A nurse came over the next morning and said, ‘You should be in ICU,’” Mothersbaugh recalled. “I said, ‘That’s ridiculous.’ She replied that she’d been a nurse for three decades: ‘You need an ambulance right now.’” Mothersbaugh’s wife, Anita Greenspan, says that the nurse saved his life. He spent the next two weeks at Cedar-Sinai, relying on a ventilator to breathe, delusional through much of the ordeal.

Read the full article. The original article is here. In addition to his nearly 50 years with Devo, Mothersbaugh wrote the theme music for Pee-Wee’s Playhouse, Rugrats, and the scores for dozens of other television shows and movies.