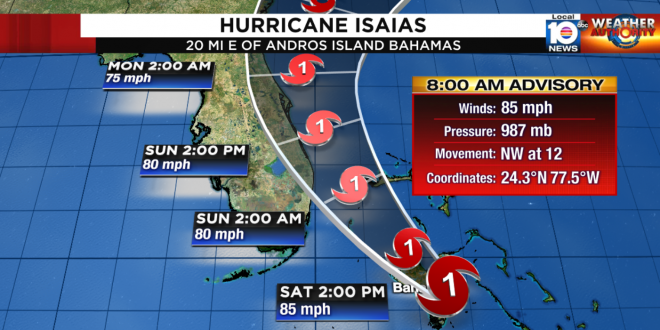 Hurricane Isaias ripped shingles off roofs and blew over trees as it carved its way through the Bahamas early Saturday and headed toward the Florida coast, where officials in Miami said they were closing beaches, marinas and parks.

Miami-Dade Mayor Carlos Giménez said Friday that 20 evacuation centers were on standby that could be set up with COVID-19 safety measures. “We still don’t think there is a need to open shelters for this storm, but they are ready,” he said.

Authorities in North Carolina ordered the evacuation of Ocracoke Island, which was slammed by last year’s Hurricane Dorian, starting Saturday evening. Meanwhile, officials in the Bahamas evacuated people on Abaco island, who have been living in temporary structures since Dorian.

The Category 1 storm’s maximum sustained winds increased to 85 mph, but its forward motion slowed down to 12 mph as it continued moving northwest, according to the NHC’s latest advisory.

A hurricane warning was issued by the NHC for all coastal communities from Boca Raton to the Volusia-Flagler County line. The latest projections show the storm arriving at the Treasure Coast by Saturday evening.

At a Saturday morning news conference, Florida Gov. Ron DeSantis urged preparedness and advised Floridians to have five days worth of food, water and medicine on hand.

Gov. Ron DeSantis has declared a state of emergency for coastal counties in Florida ahead of Hurricane Isaias, which is expected to bring a dangerous storm surge, flooding and high winds. https://t.co/VeY6Al2Nuy