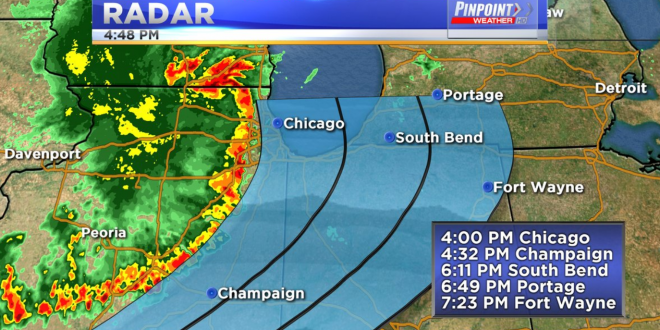 The complex of storms has knocked out power and caused tree damage from around Omaha, Nebraska, to central Iowa. Winds gusted up to 112 mph in Midway, Iowa, and up to 85 mph near Moline, Illinois, as these storms moved through.

The severe thunderstorms are expected to track eastward into northern Illinois, far southern Wisconsin, northern Indiana and southwestern Michigan through the afternoon and early evening hours.

A derecho can produce destruction similar to that of a tornado, but the damage typically occurs in one direction along a relatively straight swath. The term “straight-line wind damage” sometimes is used to describe derecho damage, says the SPC.

This storm complex is within the same area that is also under a moderate risk (level 4 of 5) for severe storms. The SPC upgraded this risk level Monday afternoon because of the formation of the derecho. The risk area includes over 13 million people.

#Derecho of exceptional intensity blasting across the Midwest pic.twitter.com/V76WMa5ipW