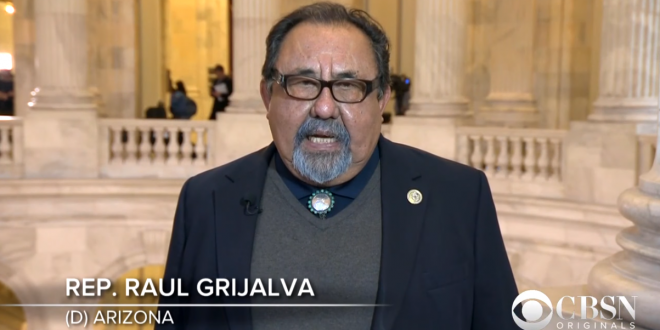 Rep. Raúl Grijalva, D-Ariz., said Saturday he tested positive for the coronavirus, becoming the second lawmaker this week to announce they had contracted the virus.

Grijalva said in a statement that he did not have any symptoms and felt fine. On Wednesday, Rep. Louie Gohmert, R-Texas, who has refused to wear a mask around the Capitol, tested positive for the virus shortly before he was expected to travel with President Donald Trump to Texas.

Grijalva had attended a a hearing of the Natural Resources Committee with Gohmert on Tuesday. During the hearing Gohmert was at times seen without a face covering, sitting in close proximity to other lawmakers including Grijalva.

How the COVID roulette wheel spins. As Rep. Louie Gohmert started speaking & spewing virus particles, Chairman Grijalva who just tested positive was in the middle next to Louie. The empty chair to the right was me, but I had just stepped into the next room for a sandwich. pic.twitter.com/hxRWHU7LZD

This is infuriating. Grijalva chairs the committee investigating the clearing of Lafayette Square. He wanted his hearing to be via video. The Trump administration said it wouldn’t cooperate unless Grijalva flew from Arizona to DC to appear in person. 1/6https://t.co/6h1XT9Si1Y

Given his comorbidities, Grijalva and his staff told me they saw this as a childish taunt — a dare. He agreed anyway, because he thought investigating what happened is important.

Guess who else is on that committee, and attended the hearing in person?

Previous GOP Sen. Kelly Loeffler Rages After Hometown Paper Calls Out Her Interview With Host Linked To Neo-Nazis
Next US Mint: Please Use Coins When Making Purchases