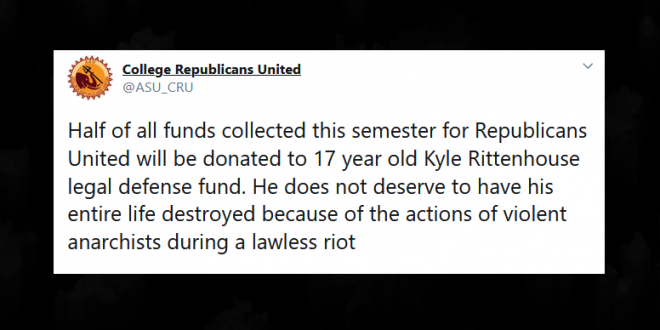 A conservative student organization at Arizona State University announced on Friday that they will be accepting donations to support the legal defense of Kyle Rittenhouse, the 17-year-old charged with homicide in the killing of two people at protests in Kenosha, Wisconsin. College Republicans United, which split from the more mainline ASU College Republicans chapter in recent years, tweeted that a portion of the funds collected for the group would be donated to Rittenhouse.

The tweet linked to a page on their website, which detailed how the organization believes Rittenhouse traveled to Kenosha county to help clean graffiti and provide private security to businesses affected by protests. “Kyle Rittenhouse is not a vigilante but a citizen who attempted to help in a city in chaos,” the website read. CRU told The Arizona Republic “they do not speak to journalists with pronouns on their Twitter page” and to “get a real job” when contacted for comment on the fundraiser.