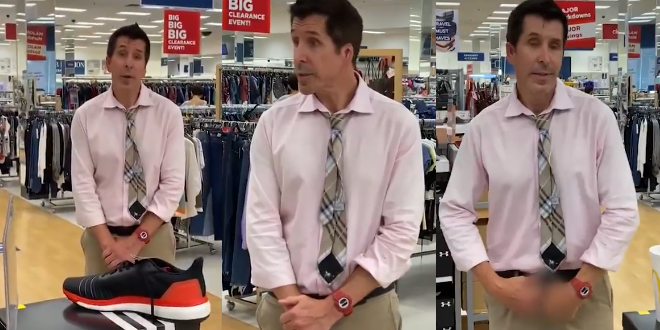 This anti-masker has found his hill to die on and it’s inside a Marshalls. Check out this video from the discount department store in Campbell, CA. The guy is shopping without a face covering, and he throws a fit when employees ask him to leave and launches into a homophobic rant.

The man in the video, who some are calling a male “Karen,” or “Kevin,” thinks he’s smarter than everyone else, but he’s not. You’ll hear him claiming it’s a $75,000 fine to deny service to people with disabilities. Seems he got his info from the alleged “Freedom to Breathe Agency.” Yeah, that’s been debunked. It’s not a real thing.

After calling the employees “dumb fucking faggots” the man appears to unzip his pants and take out his dick. Seems like an invite for fucking faggot sex. Some on Twitter claim to have identified the man. The full video is at the TMZ link.

Several posters on social media identified the ranter as the 52-year-old Gaskin, a media figure who made a name for himself in San Francisco in the mid-2000s.

His use of homophobic language surprised those who recognized him on social media as he was once a known figure in the San Francisco LGBTQ community. Starting in 2004, he hosted a weekly talk show called OUT Spoken for Comcast public access that addressed gay issues.

Today at Marshalls in Campbell, Ca this Kevin didn’t want to wear a mask. Hurled offensive comments to the workers, my friends, to customers while exposing gestures to the public. I’m reaching out to y’all in the ether to expose this m’fer to the world! #KarenStrikesAgain #mask pic.twitter.com/ftBkGsDqcW