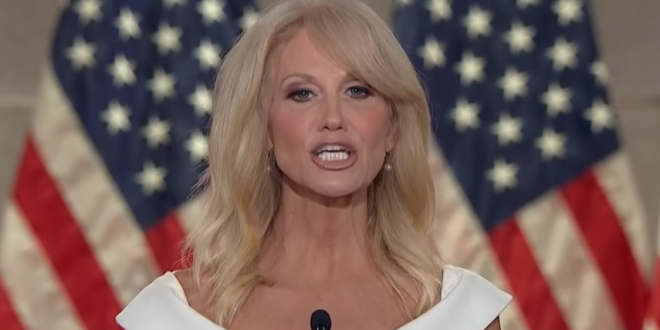 Kellyanne Conway, a top counselor to President Donald Trump, made a forceful case for the president’s reelection in a speech at the Republican National Convention on Wednesday night.

One of the president’s fiercest and longest-serving advisers, Conway attempted to humanize Trump, arguing that he’s surrounded himself with women like herself and regularly provides emotional support to struggling Americans.

“President Trump and Vice President Pence have lifted Americans, provided them with dignity, opportunity and results,” Conway said in her pre-recorded remarks. “[Trump] has stood by me, and he will stand up for you.”

“[Trump] confides in and consults us, respects our opinions, and insists that we are on equal footing with the men,” Conway said. “President Trump helped me shatter a barrier in the world of politics by empowering me to manage his campaign to its successful conclusion.”

“With the help of millions of Americans, our team defied the critics, questionable polls and conventional wisdom — and we won.”

“For many of us, ‘women’s empowerment’ is not a slogan. It comes not from strangers on social media or sanitized language in a corporate handbook. It comes from the everyday heroes who nurture us, who shape us, and who believe in us.

White House counselor Kellyanne Conway attempted to make the case at the Republican National Convention that President Trump is a champion for women, despite Trump’s history of publicly demeaning women and leveling sexist and misogynistic attacks https://t.co/exKiC8hjBw

Kellyanne Conway’s position in the WH has basically torn her family apart. Her daughter despises Trump and has called for emancipation. So Kellyanne Conway showed up at the RNC to defend Trump on national television.

It is important to remember that Kayleigh McEnany and Kellyanne Conway are congenital liars who have deceived the American people thousands of times. They have desecrated their oaths and their appearance as Sr. White House officials is illegal and grossly inappropriate.

According to KellyAnne Conway, Donald Trump “tackles the most complex problems.” Tell that to the families of nearly 180,000 dead Americans and millions struggling with this deadly pandemic.