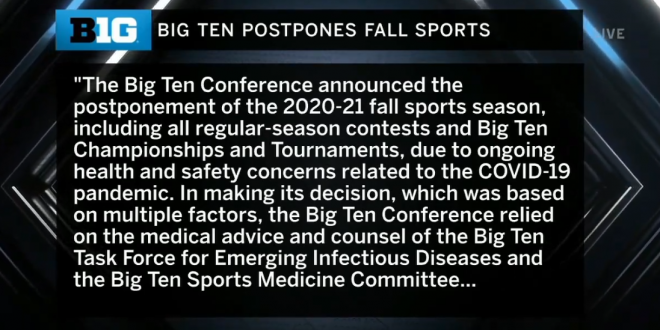 Big Ten Conference presidents and chancellors voted Tuesday to postpone all fall sports seasons, including football, with the hopes of playing in the spring, it announced Tuesday.

“The mental and physical health and welfare of our student-athletes has been at the center of every decision we have made regarding the ability to proceed forward,” Big Ten commissioner Kevin Warren said in a statement.

Officials with the ACC and SEC have indicated they plan to proceed with seasons this fall, but it’s unclear whether the Big Ten’s decision will change those plans.

Breaking: The Big Ten Conference voted to postpone college football and other fall sports, a move that could begin the final unraveling of the 2020 season. The conference commissioner said it would evaluate the possibility of playing in the spring. https://t.co/ssXxoUCOmA