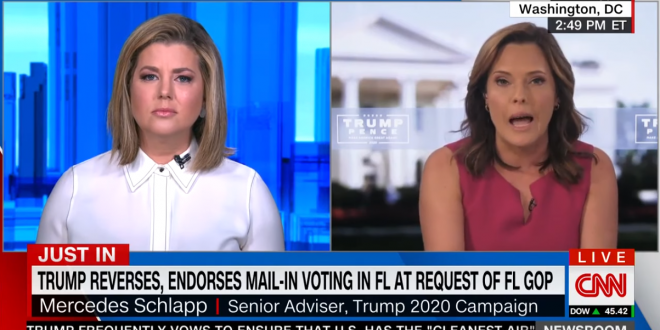 CNN Anchor Roasts Trump Campaign Flack For Lying About Her Husband: “Don’t You Mess With My Family”

Trump campaign adviser Mercedes Schlapp attempted to clean up her disastrous interview with CNN’s Brianna Keilar by penning an op-ed about the network’s supposed “dishonesty” for the website RealClearPolitics. But she made at least one major mistake.

In that piece, Schlapp wrote that she was “disturbed to learn that Brianna Keilar’s husband is a ferocious opponent of the president, a former director of the National Security Council under President Obama, and a man who tweets, among other things, that Donald Trump makes him ‘throw up.’”

Given that Keilar’s husband, Fernando Lujan, is an active-duty Green Beret officer in the U.S. military, it was a questionable strategy to begin with. But Schlapp also appeared to have several of her facts wrong.

Schlapp’s column has been edited and now bears this disclaimer at the bottom:

An earlier version of this essay asserted that Brianna Keilar’s husband is a “ferocious opponent of the president.” That reference, based on the author’s misidentification of a Twitter account by a man with the same name, has been removed. RealClearPolitics regrets the error and apologizes to Ms. Keilar and her husband, Col. Fernando Lujan.

In response to ⁦⁦@mercedesschlapp⁩’s ⁦@RealClearNews⁩ op-ed. Get your facts straight. And don’t mess with my family. pic.twitter.com/pMgIyfSEv0