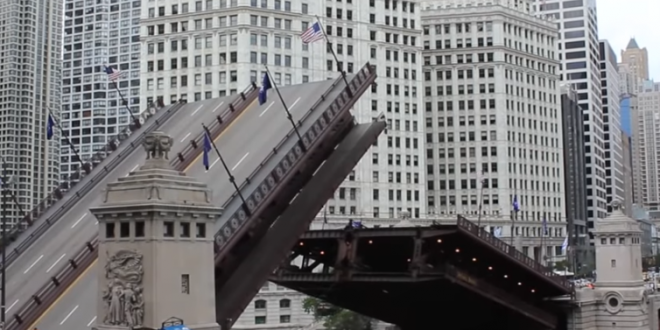 Streets and bridges are being closed as downtown Chicago is shut down amid looting and unrest Monday. All bridges are being raised along the river throughout The Loop. Chicago’s Office of Emergency Management announced street closures throughout areas in the Magnificent Mile, Gold Coast and South Loop.

CTA bus and train service to The Loop has been suspended. According to CTA, there is not bus service between Fullerton and Cermak from Ashland to the lakefront.

There are also expressway exit closures as downtown areas are closed. The Byrne Interchange off the Dan Ryan is blocked due to police activity. Commuters should seek alternate routes.

Widespread damage is reported in downtown Chicago after looting and rioting began around midnight. Witnesses report hundreds of people smashing their way into stores throughout Michigan Avenue, areas in the South Loop and the near North Side.

WGN’s Judy Wang was on the scene early and reported seeing people filling trash bags with merchandise. She also saw crowd trashing the streets outside the stores and turning over garbage cans.

Officers shot at least one person and chased suspects toting bags full of goods, tackling some to the ground and blocking off streets as they sought to restore order to the area.

It’s not clear what sparked the unrest. But it followed a tense day between police and Black residents after police shot and wounded a man in the city’s South Side, sparking a violent standoff between dozens of officers and angry neighbors.

A Chicago police spokesman said that as of early Monday morning, police had no details on how many arrests had been made or how widespread the damage was to businesses downtown.

All bridges up in Chicago to prevent access to downtown. @cbschicago pic.twitter.com/KutdT8Nbc6