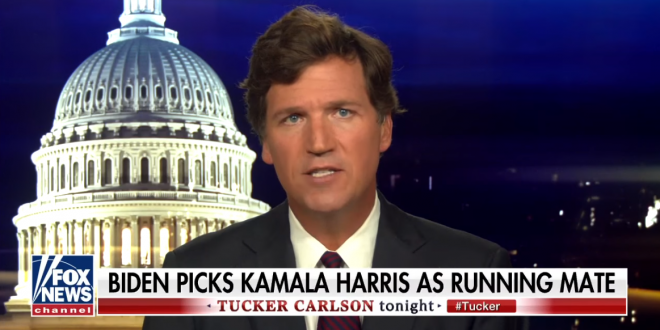 Carlson Rages When Corrected On How To Say Kamala

Tucker Carlson’s guest, Democratic political consultant Richard Goodstein, sought to help the Fox News host. “This is something that will serve you and your fellow Fox News hosts,” said Goodstein, as Carlson looked on with knitted brow.

“So I’m disrespecting her by mispronouncing her intentionally? So it begins. You’re not allowed to criticize Ka-MAL-a Harris, or KAM-a-la.” The irony is of course that it is Carlson’s job, in part, to pronounce names written on a teleprompter correctly.

He is also presumably required to be able to pronounce the names of sitting U.S. Senators, candidates for president and their vice presidential picks. No political newcomer, Harris has been in all three categories at some time in the past 12 months.

Tucker Carlson loses it when a guest corrects his pronunciation of Kamala Harris’s name pic.twitter.com/1fHIrPGuwN