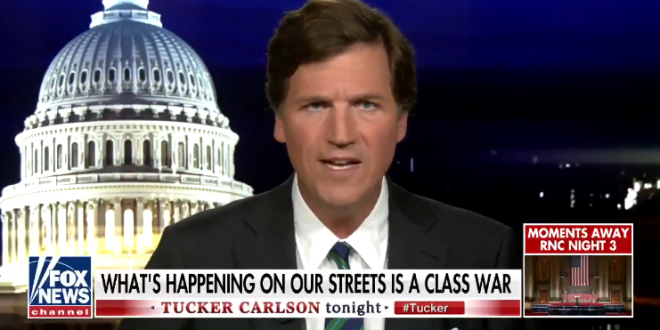 The right wing Fox News host Tucker Carlson has defended the actions of a 17-year-old who was arrested and charged with murder after two people were killed in Kenosha, Wisconsin, as white vigilante agitators shot at Black Lives Matter protesters.

Kyle Rittenhouse, from Antioch, Illinois, 20 miles south-west of Kenosha, had taken to the streets of Kenosha with a rifle after protesters marched demanding justice for Jacob Blake, a young Black father who was shot and gravely wounded by police on Sunday.

On his TV show Carlson – who has a long record of making racist and inflammatory statements, triggering an advertising boycott – said that Rittenhouse’s actions were understandable given the violence and property damage in the city.

“How shocked are we that 17-year-olds with rifles decided they had to maintain order when no one else would?” Carlson asked on his prime time television program.

During his Wednesday show, Carlson argued that “the authorities in charge of the city abandoned it” and “refused to enforce the law.”

The Fox News host said the authorities “stood back and watched Kenosha burn” over the last few nights and asked, “So are we really surprised that looting and arson accelerated to murder?”

Kenosha devolved into anarchy because the authorities abandoned the people. Those in charge, from the governor on down, refused to enforce the law. They’ve stood back and watched Kenosha burn. Are we really surprised that looting and arson accelerated to murder? pic.twitter.com/oul2KUiDi3

Vigilante violence was always one of my greatest worries about the present moment. And here we have a prominent TV host – a man who had the president’s ear – excusing it, rationalizing it. https://t.co/I3KMZveiEc

.@TuckerCarlson is inciting violence and abetting terrorism. He hits a new low every time he takes to the airwaves. https://t.co/loIIVlTZp9

If they don’t take action after this, every one of Fox News’s executives, directors, and advertisers is complicit in Tucker Carlson’s racist, murderous rants. https://t.co/YbT8as1kHg

Tonight, an opinion host on the biggest cable network in the country that does business with some of the biggest advertisers in the world and is carried by the biggest cable operators in the nation openly encouraged civilians to pick up guns and start shooting protestors. https://t.co/NRMcj1DJaW

I almost never get involved with hashtags focused on specific individuals, and don’t really go in for hashtags generally, but what Tucker Carlson is doing right now to incite mayhem and murder by roaming gangs of armed vigilantes absolutely requires Fox News to #FireTuckerCarlson

You all just paid for Tucker Carlson to defend a murderer on air.