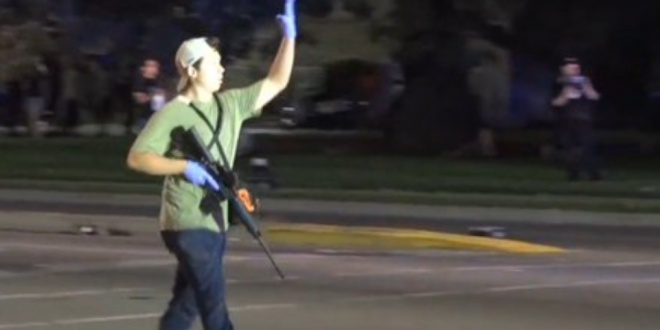 Kyle Rittenhouse, 17, of Antioch, Illinois has been charged with first-degree murder according to documents reviewed by the Daily Dot. According to the Lake County, Illinois Clerk of Courts public records, obtained by the Daily Dot, Rittenhouse has been charged with first-degree murder in Kenosha, Wisconsin, and labeled a “fugitive from justice.” The complaint states that Rittenhouse “fled the state of Wisconsin with intent to avoid prosecution for that offense.”

Two were killed and a third transported to the hospital with serious, non-life-threatening injuries, local police reported in a statement. The protests were sparked by the shooting of a Jacob Blake, an unarmed Black man shot by police on Sunday night. A Facebook profile purportedly belonging to the teen is rife with pro-police content. In his profile pic, he poses with a high-powered rifle that appears identical to the Kenosha shooter’s.

The shooter who killed two people last night in Kenosha has been identified as Kyle Rittenhouse. He has yet to be arrested.

He’s part of a Wisconsin militia group and he is only 17.

How can literal children walk around with guns, unchecked, and murder people in the streets? pic.twitter.com/gWKVp3plzy

How is Kyle Rittenhouse, an alleged mass shooter in Kenosha still walking around in front of police with a loaded riffle not shot at by them? Is he not a threat to them or the public around him? pic.twitter.com/T2mxGoLrJt

Tonight’s shooter Kyle Rittenhouse was recorded on video receiving water and being thanked by the police for being out there to help.

The police are claiming they dont know who the shooter is yet.

But they know him well, he’s a Public Safety Cadet. pic.twitter.com/WD9lX58uxo

This is the suspect who shot multiple people in Kenosha tonight.

This aint a game out here. Stop treating this sh*t like its a block party, and understand people have wage war on you pic.twitter.com/SwJp8peVdB

Two people were shot + killed + another wounded in #Kenosha after a white militia member opened fire during ongoing protests. Shooter identified himself on video as Kyle; seen earlier being given water by riot police who thanked him for being there. Militia promoted on InfoWars. pic.twitter.com/jKW24k6gUU