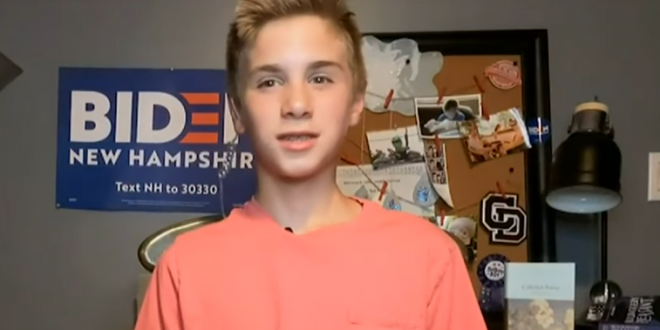 Twenty seconds into his speech to the Democratic National Convention on Thursday, Brayden Harrington started to stutter. He knew he would — it was the reason the 13-year-old was addressing millions of viewers from his bedroom.

As he had explained to kick off his speech, his life had changed after meeting former vice president Joe Biden in February. “He told me that we were members of the same club. We … ” Brayden said, shutting his eyes as he drew out an “s” sound, willing the word to emerge: “… stutter.”

And then, he kept going — smiling, poised, and delivering a powerful message about how Biden, who has spoken openly of his battle with a speech impediment, had inspired him to reach higher.

In Harrington’s address, the teenager said that “without Joe Biden I wouldn’t be talking to you today,” and that during their first meeting, Biden had told him they were “members of the same club”.

“It was really amazing to hear that someone like me became vice-president. He told me about a book of poems by Yeats he would read out loud to practice,” he said. “He showed me how he marks his addresses to make them easier to say out loud. So I did the same thing today. And now I’m here talking to you today about the future, about our future.”

The veteran US journalist Dan Rather described Harrington’s speech as “pure, unvarnished courage”, while CNN’s senior Washington correspondent Jeff Zeleny tweeted that he was “just remarkable. What courage and guts it took him to do this. Good luck, Brayden. You will go far.”

“We need the world to feel better.”

“Kids like me are counting on you to elect someone we can look up to.”

Decency. I miss decency. The president should be a role model not a cautionary tale!

Brayden Harrington stole the show, and I think that would make Joe very happy. ❤️

Brayden Harrington’s video about having a stutter like Biden was also a stark contrast to the President who mocks reporters with disabilities. #DemConvention

Did you watch the young boy from New Hampshire who stutters? Did you listen to his story about being helped by Joe Biden? Did you see the pictures of Biden helping him read a poem by Yates? Could you ever imagine Trump doing the same?

I stutter. Have my entire life. Taught myself to hide it but it’s always there. Always

There is no way I could be as brave as that little boy, at his age.