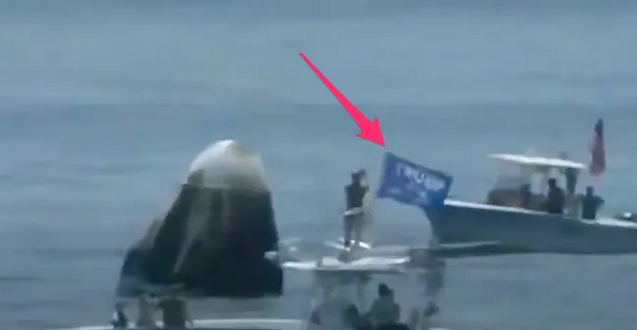 The capsule bobbed in the ocean for about 15 minutes as professional recovery boats sped to retrieve the astronauts — but they weren’t alone on the water. The landing site off the coast of Pensacola, Florida, drew a crowd of onlookers in their own boats. Some got close to the spaceship, including a boat flying a Trump flag that sped into view of NASA’s live feed.

“Maybe next time we shouldn’t announce our landing zone,” the SpaceX engineer Kate Tice said during NASA’s live feed of the landing. NASA Administrator Jim Bridenstine said in a briefing shortly after the splashdown that the crowd of boats “was not what we were anticipating.”

The US Coast Guard had cleared the area ahead of the landing, Bridenstine said, but after the capsule splashed down, “the boats just made a beeline for it,” he said. “We need to do a better job next time for sure.”

A private boat with a Trump flag passed by SpaceX’s Crew Dragon Endeavour as recovery teams attempt to secure the spacecraft, in what appears to be a serious violation of the splashdown zone’s safety area. pic.twitter.com/kwbpAlYM9t

So is Pres. @realDonaldTrump going to say something about the private boats flying Trump flags that got in the way of the @SpaceX Dragon capsule recovery, endangering the @NASA astronauts and themselves? pic.twitter.com/Zf0jlrMLkE

SpaceX literally had to go to the dragon capsule and shoo away a bunch of idiots in private boats with Trump flags that wouldn’t stop riding around the spacecraft.

Welcome back to America, Astronauts.