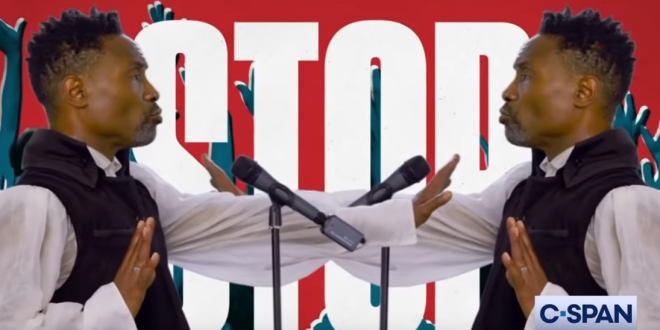 Following Michelle Obama is no easy task, but the duo of Billy Porter and Stephen Stills stepped up with a virtual performance of “For What It’s Worth” during the opening night of the 2020 Democratic National Convention.

While Stills first wrote and sang the song — which is perhaps better known by its subtitle, “Stop, Hey, What’s That Sound?” — as a member of Buffalo Springfield in 1967, it has become a generation-spanning protest anthem for times when the world seems particularly upside-down, for political reasons and otherwise.

Between the Trump presidency, coronavirus and Black Lives Matter, there have been plenty of potential uses for the song in recent months, and Porter covered it earlier this year.

Stephen Stills, for his part, approved of Porter’s cover of his landmark song, which was originally inspired by a Sunset Strip protest over a club curfew. “For many years no one tried to ‘make it theirs’ as covers are supposed to do,” he said.

“That an artist of Billy’s caliber has chosen to add his flourish to my song from so many years ago is totally in keeping with what I intended.”

“It’s our call to action, and I hope people are inspired and remember to vote,” Porter added. The performance capped off a night of music from the likes of Maggie Rogers and Leon Bridges, as well as words from Former First Lady Michelle Obama and Senator Bernie Sanders.

No I’m sorry after that speech we don’t deserve Billy Porter. It’s too much.

So Rose twitter is mad that Steven Stills played his song and had Billy Porter sing it. They of course don’t know who either person is. They don’t get the graphics references. But they are mad.

@MSNBC WHY DID YOU JUST LET BRIAN WILLIAMS TALK OVER BILLY PORTER?

Previous Hannity: Mailmen Can’t Be Trusted To Deliver Ballots
Next Carlson: Dems Are “Making Up Stories” About The USPS To Set The Stage For Trump’s Overthrow By “Generals”