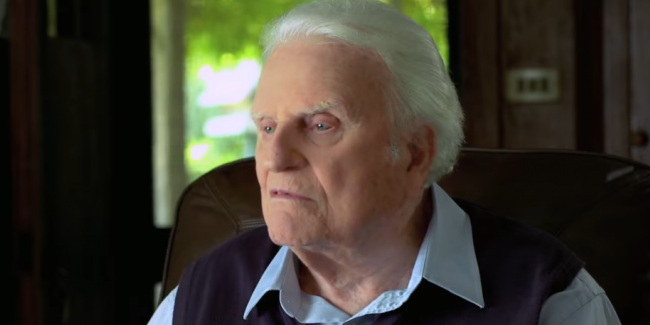 Billy Graham Statue Set To Be Installed At US Capitol

A life-sized statue of Billy Graham will be installed in the US Capitol’s Statuary Hall collection sometime next year, replacing a statue of a white supremacist that both the state of North Carolina and the US House want removed.

Last week, a North Carolina legislative committee approved a 2-foot model of the statue depicting the famous evangelist who died in 2018.

The Billy Graham Evangelistic Association, in partnership with the state, is raising money for the statue and its installation—which is estimated to cost $650,000. No state funds will be used.

I first reported on the planned statue in November last year. Recent events have, obviously, speeded things up.

White supremacist statue in US Capitol to be replaced with bust of brazenly homophobic preacher Billy Graham https://t.co/8xW0S2iViB

In 1969, Billy Graham sent a secret letter to President Nixon arguing that, if the Paris peace talks fail, he should bomb Vietnam’s dikes. This would have been a major war crime resulting in (per Nixon’s estimate) a million deaths https://t.co/HazMIxXPW7

When Billy Graham’s anti-Semitic conversation with Richard Nixon first became known in 1994, via H.R. Haldeman’s diaries, he publicly denied it: “Those are not my words.”

Then the actual tape became public in 2002. The man was both a bigot and a liar. https://t.co/K95qS2XfPl