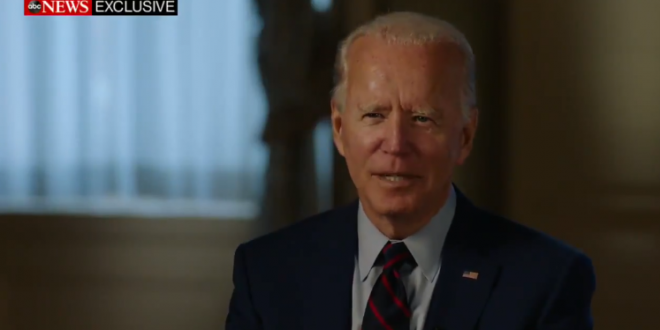 Former Vice President Joe Biden tackled questions about his age in an exclusive interview with “World News Tonight” anchor David Muir, saying he “absolutely” could serve two terms in the White House if elected. “His campaign has called you ‘diminished.’ And, I’m curious how you’d respond to that,” Muir said, pressing Biden on President Donald Trump’s repeated attacks on his mental fitness.

“Watch me. Mr. President, watch me. Look at us both. Look at us both, what we say, what we do, what we control, what we know, what kind of shape we’re in,” Biden said, referring to his vice presidential pick. “I think it’s a legitimate question to ask anybody over 70 years old whether or not they’re fit and whether they’re ready. But I just, only thing I can say to the American people, it’s a legitimate question to ask anybody. Watch me,” Biden told Muir.

Previous Trump Warns Of Getting COVID From Mail Drop Boxes
Next REPORT: Mourner From Funeral Of Trump’s Brother Broke Waiter’s Nose In COVID Dispute At Restaurant