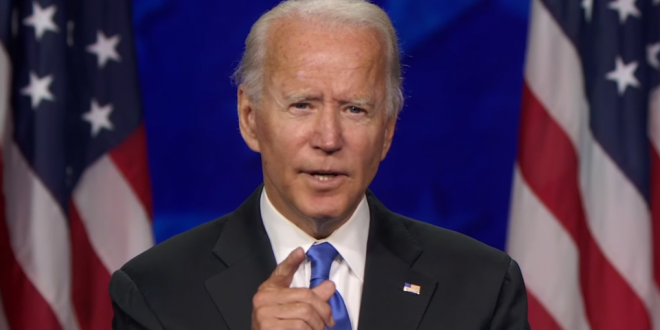 Speaking before a row of flags in his home state of Delaware, Mr. Biden urged Americans to have faith that they could “overcome this season of darkness,” and pledged that he would seek to bridge the country’s political divisions in ways Mr. Trump had not.

“The current president has cloaked America in darkness for much too long — too much anger, too much fear, too much division,” Mr. Biden said. “Here and now, I give you my word: If you entrust me with the presidency, I will draw on the best of us, not the worst. I will be an ally of the light, not the darkness.”

Mr. Biden’s appearance was an emphatic closing argument in a four-day virtual convention in which Democrats presented a broad coalition of women, young people and racial minorities while going to unusual lengths to welcome Republicans and independent voters seeking relief from the tumult of the Trump era.

I wondered as I watched Biden’s fired-up-ready-to-go address: Did any of the Fox viewers who have been told, over and over again, that Biden is just a human blooper reel… a man who can’t string a full sentence together… were any of them surprised by his passionate, articulate acceptance speech?

Fox’s Bret Baier right afterward: That was “the best he’s been, as far as his delivery.” Chris Wallace: “It was an enormously effective speech. Remember, Donald Trump has been talking for months about Joe Biden as mentally shot, a captive of the left, and yes Biden was reading from a teleprompter and a prepared speech, but I thought he blew a hole — a big hole — in that characterization.”

Biden devoted plenty of time to hitting Trump. But his aides, suspicious of news headlines that reflectively focus on the president, stressed that criticizing Trump wasn’t the main point of the speech. Biden lingered for long stretches on optimism and urged Americans to push past partisanship.

Biden’s commanding delivery could make it more difficult for Trump to paint him as staggering and senile (“Slow Joe”) at the Republican convention next week. At the same time, Biden’s focus on middle-of-the-road policies complicates Trump’s attempts to tag his ticket as pawns of the radical left.

Democrats swapped in fireworks for the traditional balloon drop to mark the close of events. In the most celebratory moment of the night, Biden stood on a stage outside, American flags in the backdrop. His wife Jill stood beside him along with his newly-minted running mate, Kamala Harris, and her husband, Doug Emhoff. On a warm summer night, they looked up at the explosion of colors in the sky, as a rowdy crowd at the drive-in convention site cheered.

Hey, all credit in the world to the team who turned the challenge of a virtual convention into the most moving and watchable one I can recall.

Just from a sheer TV production stand-point that entire thing was way way better than I expected. Really impressively done.

I am a little disappointed that Joe had nothing to say about the pressing issue of low-flow shower heads.

The Fox News viewers who have been told, night after night for months, that Joe Biden is incoherent and suffering dementia are likely not watching this speech tonight; all they’re going to see of it are deceptively edited clips spun by the network’s right-wing hosts.

What a speech tonight! Congratulations to the man who has lived a determined life full of dignity and devotion to his family and to his country. @JoeBiden will lead us out of the darkness and restore the soul of America. Let’s go win this thing.

That Biden speech did not seem very sleepy.

It is with great honor and humility that I accept this nomination for President of the United States of America.