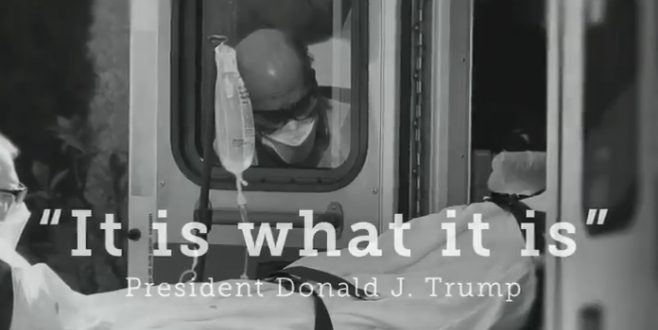 Biden Ad Roasts Trump On “It Is What It Is” [VIDEO]

President Donald Trump’s insensitive “it is what it is” dismissal of the soaring U.S. death toll from the coronavirus is turned against him in presumptive Democratic nominee Joe Biden’s new campaign video.

The clip released by the Biden campaign on Tuesday begins with footage of Trump making the callous comment during an interview with Jonathan Swan of Axios that aired on HBO.

It was one of several eyebrow-raising statements made by the president in the sit-down chat. The Biden campaign’s 27-second spot then cuts to a montage of images of medical professionals in protective equipment and people mourning those killed by COVID-19.

Thousands of Americans are dying every week. The President’s response?