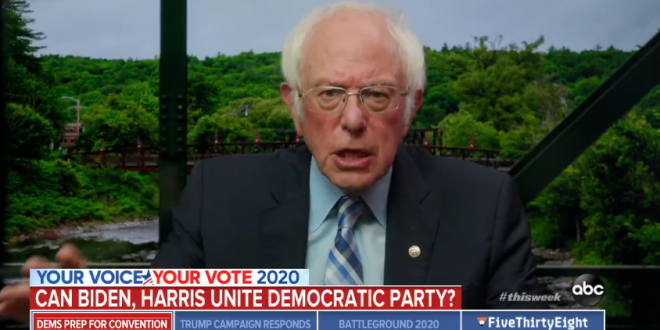 Bernie Defends Harris Pick As His Base Objects [VIDEO]

Sanders spoke highly of Joe Biden’s vice presidential pick, noting that she’s “incredibly smart [and] incredibly tough.” “I think she’s an asset for the Biden campaign, and I think she’s going to do great on the campaign trail,” he said of the California senator on ABC’s “This Week” with George Stephanopoulos.

But some progressives — particularly those who supported Sanders in the 2016 and 2020 Democratic primaries — disagreed with the decision to pick Harris, some citing her prosecutorial past as an issue, saying it doesn’t meet the moment with Black Lives Matter protests in full swing.

The tweet below is from his former campaign spox.

We are in the midst of the largest protest movement in American history, the subject of which is excessive policing, and the Democratic Party chose a “top cop” and the author of the Joe Biden crime bill to save us from Trump.

The contempt for the base is, wow.

NEW: “The overwhelming majority of progressives understand that it is absolutely imperative that Donald Trump be defeated,” Sanders tells @GStephanopoulos when asked about about disappointment about a Biden-Harris ticket in the Party’s progressive wing. https://t.co/KPgGNEHjoY pic.twitter.com/f3Jtm3g2OA

Asked if Sen. Kamala Harris, who backed Medicare-for-all, will be in ally in the fight, Sen. Bernie Sanders tells @GStephanopoulos that Harris is “incredibly smart, incredibly tough … I think she’s an asset for the Biden campaign.” https://t.co/KPgGNEHjoY pic.twitter.com/1iQSdlvrWq