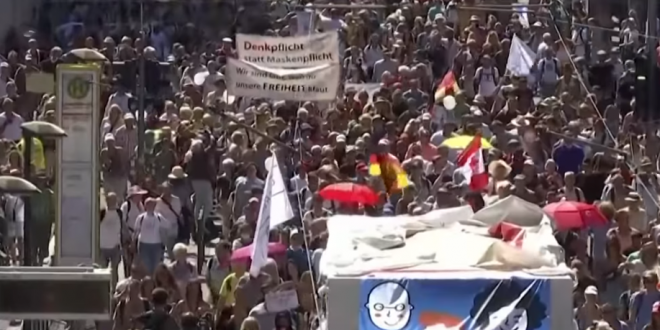 Thousands protested Germany’s coronavirus restrictions Saturday in a Berlin demonstration marking what organizers called “the end of the pandemic” — a declaration that comes just as authorities are voicing increasing concerns about an uptick in new infections.

With few masks in sight, a dense crowd marched through downtown Berlin from the Brandenburg Gate.

Protesters who came from across the country held up homemade signs with slogans like “Corona, false alarm,” “We are being forced to wear a muzzle,” “Natural defense instead of vaccination” and “We are the second wave.”

The march, which was named by organizers as “Day of Freedom — The End of the Pandemic,” included anti-vaccine groups and some far-right and neo-Nazi organizations. On livestreams of the event, some protesters could be heard yelling, “We are the second wave.”

Current coronavirus guidelines in Germany stipulate that people must maintain a distance of 1.5 meters, or about 5 feet. Where that is not possible, face masks must be worn. Berlin police said on Twitter that most of the protesters were not adhering to social distancing rules or wearing masks.

Many Trump cultists are posting an old photo of Zurich’s Love Parade and claiming millions protested yesterday in Berlin. The actual crowd was estimated by police to be around 17,000.

The NYT is totally biased and has lost its way.

Their agenda is the priority. Everything they do is advocacy. Everything. https://t.co/zU9WzlRrB0

German patriots have REALLY HAD ENOUGH of their government’s phoney COVID tyranny!

Some non-mainstream-media sources have put the total number of demonstrators nationwide to be around 3.5 million people! pic.twitter.com/6VAkDycxSW

A large crowd of far-right groups gathered for a “sit-in” at Berlin’s iconic Brandenburg Gate to protest against the German government’s coronavirus restrictions. The march included anti-vaccine groups and some far-right and neo-Nazi organizations. https://t.co/BRdKYldCVi