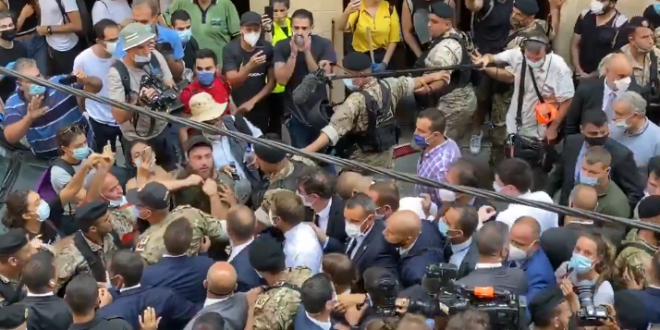 Large crowds mobbed French President Emmanuel Macron in Beirut as he toured a neighborhood of the Lebanese capital devastated by Tuesday’s massive explosion.

“Revolution, revolution!” people chanted, as shock at the devastation in the city gave way to anger on Thursday. New information reveals that Beirut officials had ignored repeated warnings about a stockpile of dangerous chemicals linked to the blast that has killed 137 people and injured 5,000.

Macron told a crowd of reporters and angry people that he would propose a “new political pact” to Lebanon’s embattled political class during his visit to a predominantly Christian quarter of the city.

A series of arrests were made following Tuesday’s devastating explosions in Beirut, Lebanon. At least 137 people were killed in a flash, more than 5,000 and some 300,000 left homeless. Lebanese President Michel Aoun warned that the death toll is likely to rise.

“It is time to grieve for our martyrs, wounded and missing,” he told the country’s national news agency.

As new details emerged, the government on Wednesday ordered the house arrest of port officials who knew about the thousands of tons of ammonium nitrate explosives stored at the port for six years without safety measures. Aoun said the officials would face “the harshest punishment” if they are found responsible.

Macron mobbed in Beirut. Down with the regime, locals chanted, and called for Revolution while declaiming Lebanon’s President Aoun. pic.twitter.com/4ntkZToUFj

“You are sitting with warlords, they have been manipulating us for the past year”

A woman confronts French President Emmanual Macron in Beirut
He embraces her and says: “I’m not here to help them, I’m here to help you”https://t.co/kWGQxTr6rF pic.twitter.com/hIxvD26w9N

French Pres. Emmanuel Macron surrounded in the street by protesters calling for regime change while touring neighborhood badly damaged by the explosion in Beirut.

In a passionate exchange, one protester said “you are our only hope.” https://t.co/t0bfEGvmZZ pic.twitter.com/fherdFfRvH

French President Emmanuel Macron walked through the blast-damaged streets of Beirut today, swarmed by people chanting for the fall of Lebanon’s government & pleading for international aid.

Macron promised to deliver a “new political pact” for the country. https://t.co/jWvEMcnEx1