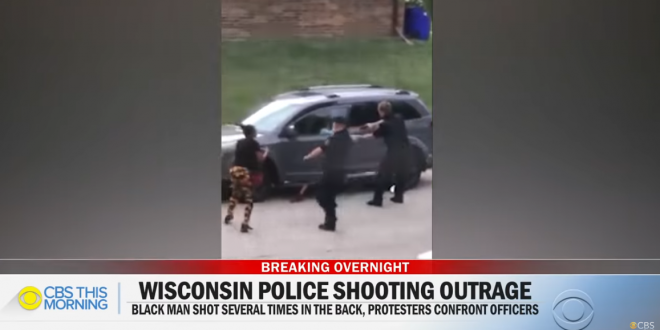 Video posted to social media showed a police officer shooting a black man in the back multiple times at point-blank range. As seen on footage, a man in a white tanktop and black shorts walked away from cops, who had their guns drawn. He stepped around a vehicle, and opened the driver-side door. One of the officers had grabbed him by the shirt, and opened fire as the man’s torso began to enter through the door.

Kenosha police said the situation happened Sunday afternoon. Cops said they were at the scene regarding a domestic incident when the shooting happened. According to authorities, officers provided immediate aid to the man who’d been shot. He was transported in serious condition to Froedtert Hospital in Milwaukee. The Wisconsin Department of Justice, Division of Criminal Investigation are investigating.

Protests erupted in overnight in Kenosha, Wis., after a Black man was shot several times at close range in the back during an encounter with police. The shooting was caught on video that has since gone viral on social media, sparking outrage.

Kenosha County officials said the county courthouse and administration building would remain closed Monday due to damage sustained from the unrest. “Court hearings will not be held today, but other county services will remain available online or by phone,” the county said shortly after a countywide 7 a.m. curfew had expired.

The video starts as Jacob Blake rounds the front of a silver SUV on Sunday, with two Kenosha, Wis., police officers following close behind, their guns drawn. When Blake opens the door and steps inside, the officers suddenly fire toward his back — at least seven times.

Blake is now in serious condition, the officers have been placed on administrative leave, and the city of Kenosha declared an emergency curfew after destructive protests rocked the city into early Monday morning.

The video footage quickly spread online as Kenosha became the latest place facing unrest after police violence caught on camera. This shooting came as the country has faced months-long protests since George Floyd’s death in Minneapolis, which set off a nationwide wave of demonstrations against police brutality and for racial justice.

A Black man being confronted by police officers in Kenosha, Wisconsin, on Sunday was shot multiple times as he tried to enter a parked vehicle on a residential street, according to officials and bystander video. He was hospitalized in serious condition. https://t.co/NBEWBsPBnt

Police in Kenosha shot Jacob Blake seven times in the back. His children were watching. I’m holding them all in my heart today and hoping for a full recovery. Police brutality is a daily threat to Black lives. We must demand accountability.

There are no words to describe the rage and weariness I feel right now.

What happened to Jacob Blake in Kenosha is clearly not an isolated incident. It is part of a deep racism rooted in the core of the American criminal justice system.

The only path forward is justice.

#UPDATE: Jacob Blake’s brother tells me Jacob is still fighting for his life. He says he just got out of surgery and is in the ICU.

Previous REPORT: Melania Is On Tape Ripping Trump And Ivanka
Next BREAKING: Pool Boy Says Jerry Falwell Watched From “Corner Of The Room” While He Screwed Jerry’s Wife