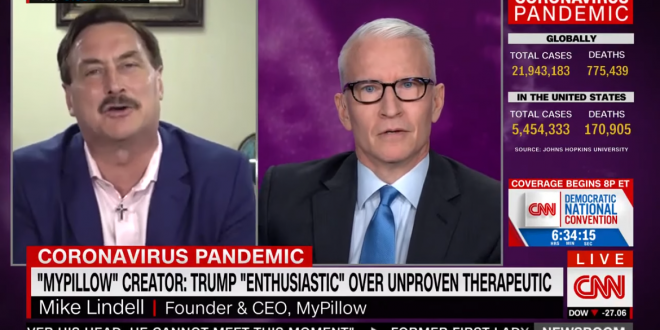 There was nothing soft or fluffy about the way Anderson Cooper took down MyPillow CEO Mike Lindell Tuesday. Lindell appeared on CNN to discuss his recent assertion that he’d taken part in a July meeting at the White House about using oleandrin — a plant extract that can be fatal if consumed — as a potential therapeutic for coronavirus. Lindell said President Donald Trump was “enthusiastic” about the substance’s possible use.

The statement came after Lindell, known to TV audiences from his commercials for MyPillow, joined the board of Phoenix Biotechnology. The biotech company makes oleandrin; Lindell has a financial stake in the company. On Tuesday, the CNN anchor repeatedly drove home the point that Lindell was telling people to use an untested and potentially lethal substance, and that he stood to make a lot of money off of it.

As you’ll see in the clip, Cooper called Lindell a “snake oil salesman” and brought up the times Lindell has had to pay massive fines for claiming that his pillows cure sleep apnea, fibromyalgia, and other diseases.

Lindell responded by ranting about Jesus and demanding that CNN have back on for an apology when he’s proven right about his COVID cure. For real. The full interview is really worth your time as a master class in how to treat these batshit Trump cultists.

Anderson Cooper just ripped Michael Lindell a new one over his snake oil salesman tactics and his attempt to make money off of the pandemic.

He also just asked the My Pillow guy: “How do you sleep at night?” pic.twitter.com/noS8TTNECO

Longer clip of Anderson Cooper’s interview with My Pillow’s Mike Lindell. It’s important that we stop people who are trying to profit off of the pandemic based on their close connections with Trump-what he is peddling is ineffective and could be dangerous. pic.twitter.com/uo6jdzF5li

Anderson Cooper: “You don’t have a great reputation. You’ve settled for a million dollars in California. You have an ‘F’ from the Better Business Bureau.”

MyPillow CEO Mike Lindell: “Because they destroyed me when I went all in for this great president.”

Mike Lindell, My Pillow CEO, on the COVID miracle cure he’s pushing on Trump: “Why would I ruin my reputation if I didn’t believe in this product?”@andersoncooper: “You don’t have a good reputation.”

Lindell keeps screaming that Trump is the “greatest president in the history of the United States.” https://t.co/looROx6peV

There will be tears on HisPillow.

Cooper: You had to pay a million dollar fine for scamming customers with claims that your pillows cure fibromyalgia.

Lindell is ranting and raving and utterly burying himself. After Cooper brought up his F rating from the Better Business Bureau, Lindell called them the “most corrupt organization in the country.” https://t.co/looROx6peV

“I do what Jesus have me do,” said the My Pillow guy to Anderson Cooper.