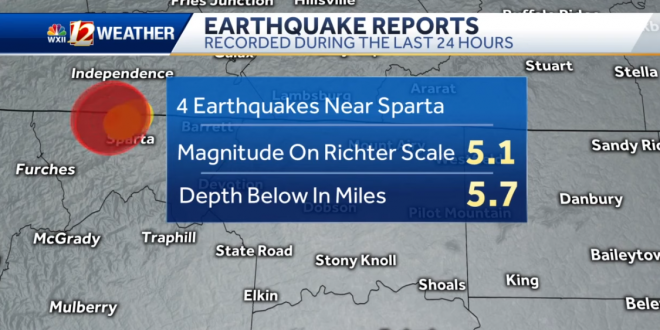 A preliminary magnitude 5.1 earthquake occurred near Sparta, in northwestern North Carolina at 8:07 a.m. on Sunday morning, very near the Virginia border. The quake rattled the Carolina Piedmont, but was reportedly felt as far away as Atlanta, part of Tennessee, Washington D.C., and Ohio.

It appears to be the strongest North Carolina quake in more than a century, since the 1916 quake that struck near Asheville in Buncombe County. That quake was also likely a magnitude 5.1 or slightly stronger. It is the strongest tremor in the Mid-Atlantic since the 5.8-magnitude event on Aug. 23, 2011 in Mineral, Va.

Numerous aftershocks, many of which will be felt in the immediate vicinity of the 5.1 magnitude quake, are likely for upwards of a week to come as the earth continues to settle, shift, and release stress.

By far the largest quake in North Carolina since a M 5.2 in 1916. #Earthquake pic.twitter.com/J3yuTrdSq5

Breaking: the #earthquake, with an epicenter near Sparta, N.C., was felt as far away as Ohio.

Numerous minor rattling aftershocks are likely – many of which will rattle the Piedmont for weeks to come. pic.twitter.com/7KOolOKXjz

To #StaySafe in earthquakes & aftershocks:
DROP: When shaking starts, get down on the floor.
COVER: Take cover under a desk, table or other furniture.Or crouch against an inside wall. Cover your head/neck w/your arms.
HOLD ON: to a desk, table or piece of furniture pic.twitter.com/1NmwmQsuUJ

The 5.1-magnitude earthquake likely loosened up a lot of long-standing man-made structures. Towns across the southeast should look out for the safety of their residents and permanently remove all Confederate monuments, just in case.