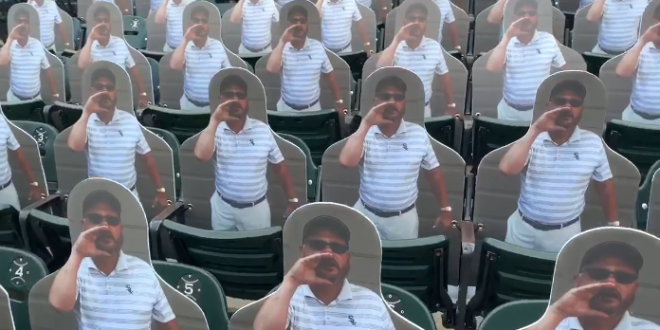 White Sox Fan Buys 100 Cutouts Of Himself For Stands

Paul Garrett hasn’t missed a season-opener at Sox Park since 2005, which not only kicked off a magical championship season for the Chicago White Sox, but that also began a run of 14 years that Garrett and his family have spent cheering on Chicago’s South Side Major League Baseball franchise in their home ballpark.

So when the White Sox announced an initiative that allowed fans to create cardboard cutouts of themselves that would be displayed around Guaranteed Rate Field for this weekend’s three-game series against the Minnesota Twins, Garrett, who lives in Oakbrook and has been a White Sox fan since 1972, knew he wanted in.

The cutouts sell for $49 each and the proceeds go to charities supported by the White Sox. One hundred cardboard Paul Garretts will silently heckle the opposing team from behind the visitors dugout.

White Sox fan Paul Garrett bought 100 cardboard cutouts of himself! He’ll be cheering on the White Sox near the visitors dugout. pic.twitter.com/hj8TJbyhpP