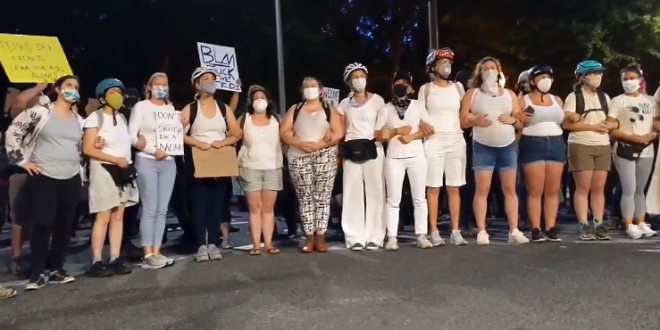 Dozens of women wearing yellow linked arms to form a protective “wall of moms” around Black Lives Matter protesters in Portland, Oregon, on Sunday as the protesters clashed with federal law enforcement. Video from the scene showed crowds chanting “Feds stay clear, moms are here!” and “Feds go home!” before protesters toppled a fence erected around the federal courthouse. Federal agents fired back with what appeared to be tear gas and flash bangs, the video showed.

Portland police said none of their officers were present, nor did they engage with the crowds or deploy gas. The Department of Homeland Security couldn’t be immediately reached for comment about the involvement of federal agents in Sunday’s events. In an earlier statement regarding Saturday’s protests, the department described the demonstrators as “violent anarchists” who were “assaulting federal officers and damaging federal property.”

More protesters have arrived. A line of women haves linked arms to block the street. I’m told they call themselves the “wall of moms.” They’re chanting “feds stay clear, the moms are here” pic.twitter.com/eyYpUuoSRV

The ‘moms against police brutality’ is out in front of the justice center tonight to protest escalating police violence in the streets of Portland. #PortlandProtest #PDXprotests #BlackLivesMatter pic.twitter.com/a5WE8VIk4G

I am here outside the Federal Courthouse in Downtown Portland, where a crowd of mothers have gathered again after being tear gassed last night by feds.

This is one of the largest Portland crowds we have seen this month. pic.twitter.com/QuAwj8xvD2

Incredible scene in Portland right now. A group of Moms are chanting, “Feds stay clear! Moms are here!” at the federal courthouse.

The moms have formed a line on the street in front of the Federal Courthouse. The chant of “I don’t see no riot here, take off your riot gear” continues, led by them. #PortlandMoms. #portland #PortlandProtest #portlandprotests #PortlandOregon #PortlandOR #oregon #BLMprotest #PDX pic.twitter.com/GdqjkRRHu6

The Mom-tifa brigade in Portland tonight is truly amazing.