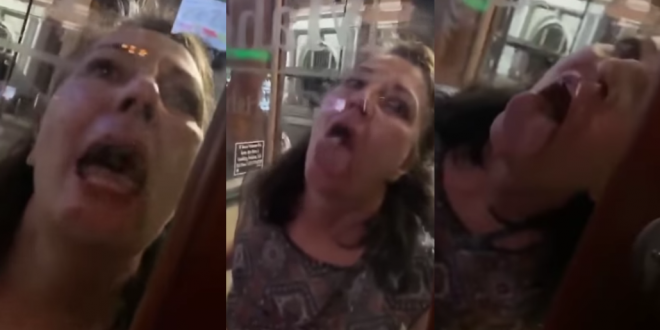 VIRAL VIDEO: “Zombie Karen” Tries To Smash Through Bar’s Door, Was Refused Entry For Not Wearing A Mask

Another day and another Karen video has gone viral on the Internet. The latest Karen video comes from Houma, Louisiana where a drunk woman lost her mind when she was refused entry at a local bar.

In the video, the woman can be seen licking the bar window and then trying to ram herself through the door. She eventually ended up knocking herself out and getting arrested by the police.

The lady was named “Zombie Karen” after people joked that she resembled the zombie from the Will Smith movie “I AM Legend”.

On this episode of Karens gone wild. Meet I am Legend’s own Zombie Karen!!

The establishment wouldn’t let her in without a mask and she straight turned into a live human I am Legend zombie!! I laughed from a good healthy place at this one!!! 🤣🤣🤣#karensgonewild pic.twitter.com/DXZVAjXyp6