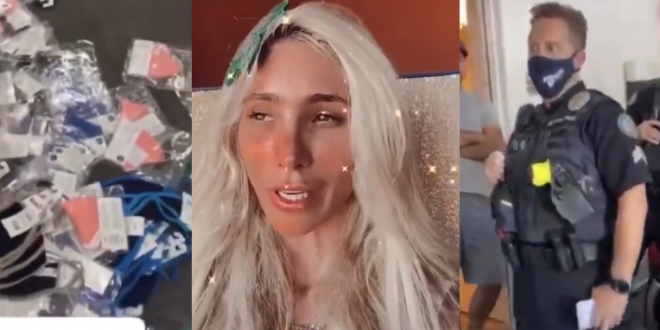 An Arizona woman, dubbed by social media as the latest “Karen,” filmed herself destroying a face mask display inside a Target store over the weekend. In the footage, Melissa Rein Lively, who runs a public relations company in Scottsdale, can be heard going on explosive rant as she points the camera to a display of protective face masks coverings.

“Finally we meet the end of the road. I’ve been looking forward to this shit all my fucking life,” says Lively in the video, which has been viewed 5.9 million times. When the officers confront Lively, she informs them she’s a spokesperson for the White House and she can’t share “classified information.”

She added, “I was hired to be the QAnon spokesperson.” She asks them “Why? You let everybody else do it I can’t do it because I’m a blonde white woman? That’s wearing a fucking $40,000 Rolex.”

Police came to her house and she was arrested on IG Live saying she is a spokesperson for QAnon & the White House and wanted the police to “call Donald Trump and ask him” because she can’t share any “classified information.”