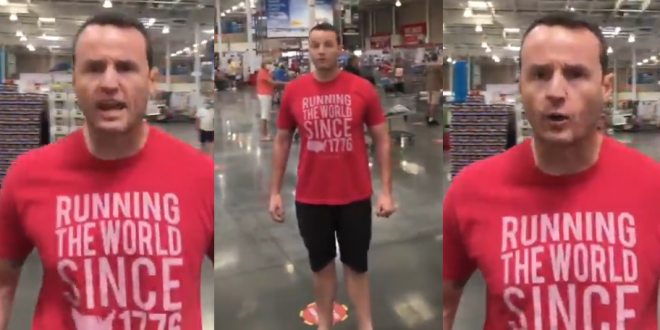 VIRAL VIDEO: Man Screams “I Feel Threatened, Back The Fuck Up!” When Asked To Wear Mask At FL Costco

A man has lashed out at an elderly woman who asked him to wear a mask in a heated confrontation at a Costco store. In a shocking video taken at the scene, the man screams an expletive-laden tirade at the customer in the Gulf Coast Town Center store in Fort Myers, Florida.

The man, wearing a red “Running the World Since 1776” shirt – a reference to the American Revolutionary War – approaches the elderly lady and a man believed to be defending her.

The man continues to approach the pair as he yells: “I feel threatened, I feel threatened! Back up! Threaten me again! Back the fuck up, put your fucking phone down.” He was later escorted out of the store.

Florida man at Fort Myers Costco in “Running the World Since 1776” shirt flips out on elderly woman who asked him to wear a mask and man who defended her #BecauseFlorida (via @profjaffar) pic.twitter.com/PDOvi33qHK

This occurred at the Gulf Coast Town Center location on 6/27 and one of the customers targeted said: “To give Costco the credit, they escorted him out and made me wait inside and monitored him until he left and then they send someone with me to the care to make sure I’m okay.”

Seems like a cop to me 🤷‍♂️ That yell is either military or police. Or military police.

An aggressor with veins popping and hands fisted saying “I feel threatened” while trying to start a fight and obviously not feeling the least bit threatened?

Guarantee he is conceal carry and has played that out in his head. So he could claim he was just standing his ground. And just wanted the guy to make one move towards him