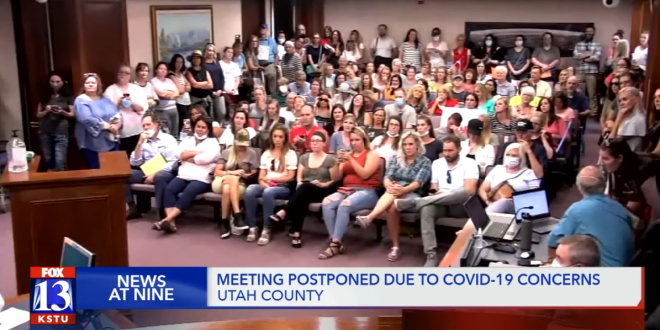 As she walked up to the podium to speak, one of the moms grabbed a face mask and spit her gum out into it. “It’s garbage,” she shrugged, wadding it up. “It doesn’t work anyway. Not for me and not for my kids.”

A dad who spoke after her said he, too, doesn’t think the masks are effective, and said he’s pulling his kids out of school this fall if the state doesn’t lift its mandate requiring all K-12 students to wear a face covering.

Parent after parent followed at the Utah County commission meeting Wednesday afternoon, objecting for more than two hours to having their kids in masks even as counts of the virus continue to climb across the state, where there are more than 30,000 confirmed cases.

As the meeting started, protesters wearing Trump 2020 hats and hoisting small American flags poured into the small boardroom. Tape had been laid on chairs and on the ground to maintain social distancing, but the demonstrators stripped it off, sitting side-by-side and gathering against the walls.

Ainge, the commission’s chair, ended the meeting little more than a minute after it began. But even after he got up and left, the protesters got up one by one to rail against the face mask order, rattling off a catalogue of reasons they opposed it.

As he left, Commissioner Tanner Ainge stopped outside the building to answer questions from reporters and some of the protesters, and pointed out that the commission doesn’t have any power regarding the mask mandate for students because it is a directive issued by the state and the local school district.

One woman pushed back, yelling at Ainge and asking him why he would force her daughter to wear a mask. Ainge again affirmed the school mask mandate wasn’t his decision. Immediately after, the woman experienced what appeared to be a panic attack and was transported to a hospital by paramedics.

This group does not represent a majority of Utah or Utah County.

They were organized by Bill Lee to recklessly pack the room for a vote that should not have even been on our agenda in the first place.

In the wake of hundreds of Utah Co. parents crowding a county commission meeting without masks or social distancing, Utah congressman says they are the onex who should lead the way in school reopening decisions. https://t.co/f1SfiPFSaq

I wonder their thoughts on redlining, COLOREDS water fountains, Blacks forced to the back of buses, & segregated schools & hospitals? If they’re this upset about masks I’m sure they would’ve been on frontlines protesting Jim Crow law for ‘freedom’ #utpol https://t.co/mKKZTOirJk